After a second day of two rounds of play at the Squash Time Club in Eindhoven, the individual draws of the WSF World Juniors have reached the quarter-final stage. 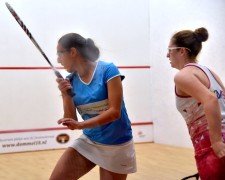 The Girls’ last eight is, with one exception as predicted by the seedings, and is dominated, as expected, by Egypt, but the progress of their top four seeds was anything but straightforward.

Top seed and defending champion Habiba Mohamed continued to impress as she saw off a spirited challenge from Colombian Laura Tovar, but second seed Nouran Gohar dropped her first game of the tournament as she beat New Zealand’s Eleanor Epke to reach the quarters. 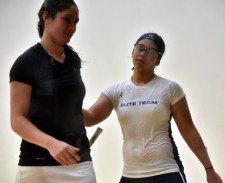 Salma Hany and Mariam Metwally, the 3/4 seed, had much harder times of it. Hany needed all five games and a mini-comeback in the decider to get past compatriot Mayar Hany in just over an hour, while Metwally found herself embroiled in a brutal tussle with the USA’s Reeham Sedky.

“That was so tough,” admitted Hany, “she was playing so well, I was 2-1 down and 4-0 down, I’m just so relieved I was able to pull myself together in the fifth to get through.”

After losing the first game to the dynamic and hard-hitting Sedky, Metwally had to save game balls to avoid going two games down before finally completing her 11-13, 18-16, 11-8, 11-7 win in a marathon 81 minutes in front of a packed and noisy crowd. 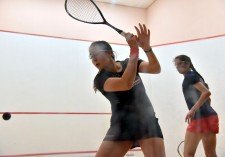 “I started the match feeling really calm and focused, but halfway through the first I started putting so much pressure on myself, I was so nervous and couldn’t do anything,” said Metwally. “She was attacking everything and me, all my dropshots were strokes or tins!

“I was aware of all the Americans in the crowd and it was getting really tough. told myself I couldn’t afford to lose the second game, if I had I would have been going home, but thankfully I just managed to take it and it worked out from there. 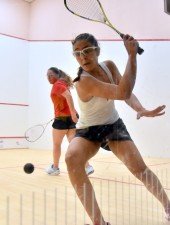 Seven seeds through to Boys’ quarters too

It was a similar story in the Boys’ draw where seven of the expected players booked their quarter-final places. 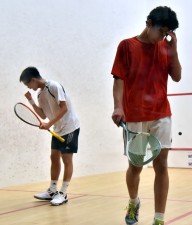 The exception was Pakistan’s Asim Khan, who beat yesterday’s upset hero Charlie Lee in straight games to set up a meeting with Eain Yow Ng, who in the penultimate match of the day needed all five games to get past Jordan’s Mohammed Alsaraj.

“I’m so relieved to win that,” said the 5/8 seeded Malaysian. “It was much harder than I wanted when I was leading 2-0 and 10-8! I lost a bit of focus. He came back well, he had a five-setter this morning and not much rest, he did everything he could. 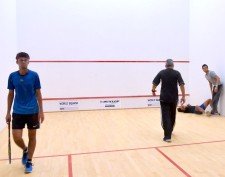 “In last year’s worlds I was leading 2-0 and lost in five so that was in my mind, I didn’t want that to happen again so I’m glad I managed to take that fifth.” 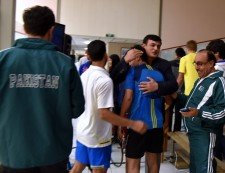 The final match of the round was even longer, as Pakistan’s Israh Ahmed won a see-saw battle against Youssef Addallah. In the middle of the fifth the Egyptian slipped, and despite taking a few minutes’ break he couldn’t stop Ahmed taking the final five points to make it a hat-trick of Pakistanis in the last eight. 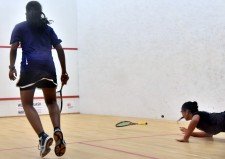 First up was the Girls’ third round, which saw just one more seed fall as Malaysia’s Siv Subramaniam came from 7-9 down in the fifth to beat Australia’s 9/12 seed Lakeesha Raree. Yesterday’s ‘giant-killer’ Kayley Leonard continued to impress as she became one of three US players, along with Sabrina Sobhy and Reeham Sedky, to make the last sixteen.

England also have three players through to the fourth round in Georgina Kennedy, Lucy Beecroft and Amelia Henley, but Egypt have the greatest representation with victory for all five of their players, including top seeds Habiba Mohamed and Nouran Gohar. 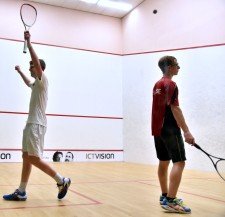 Top seeds Diego Elias and Tayyab Aslam remained on course, although Pakistan’s Aslam had to recover from losing the first game against Qatar’s Azlan Amjad before booking his place in tonight’s last sixteen alongside compatriots Asim Khan and Israr Ahmed.