The finals of the WSF World Juniors in Eindhoven are set, with defending champions Habiba Mohamed and Diego Elias both through after contrasting semi-final wins at the Squash Time Club. 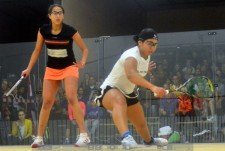 The first of two all-Egyptian Girls’ semis was a brutal, thrilling encounter between Mohamed and Salma Hany, who barely survived yesterday’s quarter-final.

Those efforts didn’t seem to have taken their toll as Salma took a close first game 12-10, a stroke on her second game ball. Habiba stormed back in the second, taking a 5-1 lead and pulling clear from 5-4 – after Salma had to repair a grazed elbow after a despairing flop towards a dropshot – to level the match 11-8.

The third was, like the first, close all the way. Salma managing to stay a point or two ahead, Habiba bemused at some of the strokes that were given against her for not clearing’ Salma couldn’t convert her first two game balls at 10-8, earned a third with a dropshot and was relieved as Habiba tinned for 12-10.

Those three games had taken 59 minutes to complete – there were a good number of lets, but plenty of long, tough rallies too, neither willing to give an inch. 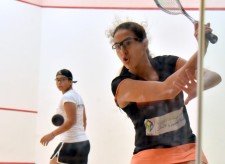 Again in the fourth Habiba powered ahead and kept a two or three point advantage throughout as she levelled again 11-6, despite receiving a warning for coaching towards the end of the game.

Cue a dramatic decider – Habiba started the better, leading 3-1 but Salma levelled at 5-all, then moved ahead, Habiba bemused again at some decisions. A stroke took Salma to 9-6 as a ball squirted out of the corner towards Habiba, and exactly the same thing happened to make it 10-6 and the champion was on the brink of an exit.

For the next four rallies Salma seemed to be waiting for the win to be given to her, but Habiba is never likely to let a match go like that, and she fought her way back to level the match 10-all.

Salma went for a winner, tinned for match ball to Habiba who then tinned in turn for 11-all. Habiba fired the ball deep and picked off the loose boast, then on her second match ball fired in a winning boast from deep to keep the trophy in her determined hands, for at least one more day.

“I gave it all,” said a disappointed Salma, “but it didn’t quite happen today, that’s squash.” 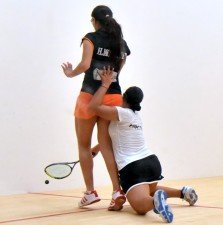 Habiba was delighted and relieved:

“I’m happy to win of course, but I don’t feel like I played well. All credit to Salma, she played so well and made it a really tough match. She had a lot of strokes which I didn’t agree with, but I had a chat with the referees afterwards who explained what was happening, I’d like to thank them for doing a tough job.

“At 6-10 in the fifth I was telling myself that I was the number one and I want to stay there, I won’t lose, I just won’t lose!

“Now I’ll need to get some rest before the next match. I’ll do my best, and I won’t give up …” 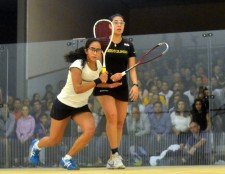 The second Girls’ semi was less dramatic, but equally keenly contested as Nouran Gohar repeated her win over Mariam Metwally at the same stage in last year’s event to set up a repeat final against Habiba.

It was Metwally though who started the better, her attacks paying dividends as she took the first 11-5. From the outset of the second though Gohar took the initiative and held it for the best part of the next three games as she took the lead 11-7, 11-8 (a few late points keeping Mariam interested) and powered to a quick 10-2 lead in the fourth. 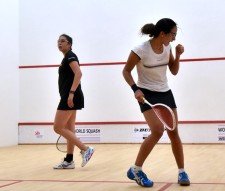 It was then that Mariam started playing as she had in the first, getting the better of five tough rallies to pull back to 10-7. A dropshot from Nouran on the next rally was too tight though, and the repeat final, between the top two seeds, was set.

“I just didn’t find my game at the start,” admitted a relieved winner, “she was playing really well and there wasn’t much I could do. For the next three games I felt I was in control, but then at 10-2 she started attacking everything again, going crazy and coming back at me. 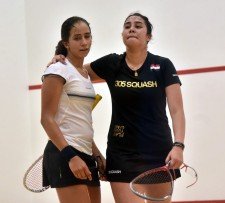 “I was so relieved at the end, I though it would be a let but I was so glad when I head the referee say ‘no let’, it was getting close!

“I haven’t played Habiba since last year’s final, so I haven’t thought about a plan yet, maybe I need to now! I hope it will be a good final, a clean match and that the crowd enjoy it.” 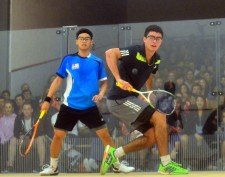 Elias was in control throughout his match with Eain Yow Ng, the Malaysian holding his own up to 3-all in the first game, but then scoring just four more points as Diego made his size, power, reach, control – you name it – tell. 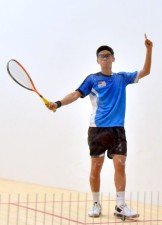 1) towards the end of the first they engage in a counter-drop battle at the front left, Yow dropping – pretty tight drops too – Diego reaching it and lifting the ball up, half a dozen times or more. Finally a dropshot is almost too tight and Diego’s lift goes into the middle of the court inviting an easy winner, which Yow naturally tins.

2) at 0-10 in the second Yow finally gets a point, on a stroke, and raises his arms in the air in short-lived triumph.

“I enjoyed that, apart from the running,” said the Malaysian. “I’ve played a few of the top guys in PSA events now, but I’ve never been put under pressure like that.” 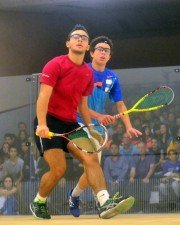 We already knew that Diego’s opponent in the final would be an Egyptian, and it will be 3/4 seed Youseff Soliman, who beat compatriot Saadeldin Abouaish in four games that took well over an hour to complete.

Saad, who must have been feeling the effects of yesterday’s titanic tussle in which he ousted the second seed, once again made too many errors in the first two games as Youssef looked to be heading for a comfortable win. 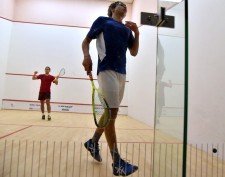 The last two games were both well contested though, very sportingly played as you would expect between two friends and training partners, but Soliman got the better of the final points in the fourth to reach the final – the last rally was surely the longest of the tournament. 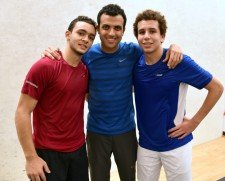 “Reaching the final is a big thing for me,” said a delighted winner. “It’s hard to play someone you know so well, I tried to change my game but he played well and made it very tough at the end.

“I hope I play well in the final and that it’s a good match.”

MORE Inside the World Juniors Interviews