Gohar the new champion as Elias makes it two

A new Girls’ world junior champion was crowned in Eindhoven after Nouran Gohar beat Habiba Mohamed in a dramatic repeat of last year’s all-Egyptian final – for a fifth successive Egyptian win, and nine out of the last ten –  while Peru’s Diego Elias joined the elite few who have won the world junior title twice as he beat Yousef Soliman in straight games.

Last year in Namibia Habiba Mohamed was the underdog, but came from a seemingly losing position to beat Nouran Gohar to become world champion, and she started today as the top seed. 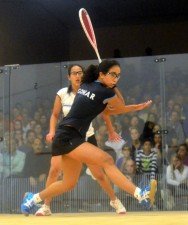 It was Gohar though, the second seed but higher-world-ranked player (15 v 19) , who started the better, taking a 4-0 lead in the opening game, then pulling away after Habiba had levelled to take the lead 11-6. She carried that momentum into the second, leading 4-1 and 6-3, but Habiba is a fighter, and her determined running and fierce hitting started to pay dividends as she pulled back, taking the last six points of the game -five of them errors from Gohar – to level the match 11-7. 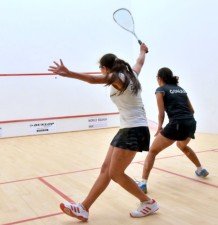 In such a fiercely contested match, there was much for the referees to do, especially at the start of the third game where Habiba took a 4-2 lead, five of the points coming from strokes awarded. This time though it was Nouran’s turn to fight back as she levelled at 5-all and moved on to retake the lead 11-7.

The fourth was an epic – 30 minutes of unrelenting effort and tension. Habiba led 4-1, Nouran levelled at 6-all. 7-all, 8-all, 9-all, game ball for Habiba on a no let, 10-all on a stroke. Into extra points, and no let up as each had opportunities, each denied by their opponent’s determined play, the referee’s decisions or, less often, their own errors. It was gripping stuff. 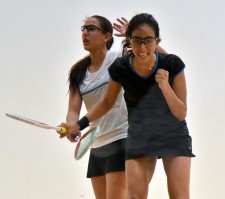 “I won’t lose” Habiba told herself when facing four match balls in the semi-finals, and she didn’t. But Nouran is a fighter too, and she really, really wanted it too.

“I can’t feel anything right now, I’m so happy,” said a delighted winner. “In the second game she played very well and I lost concentration, but then I played well again in the third.

“I didn’t think of last year at all, I know I played badly then and I didn’t want it to affect me.

“The fourth was so tough, if I’d lost that I don’t think I would have had anything left, I was so pleased to finish it in four, I really don’t know what happened at the end!” 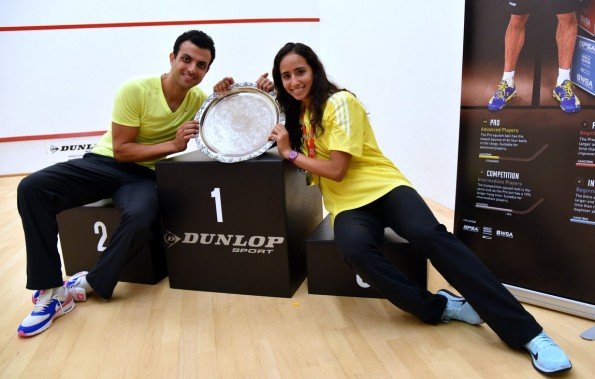 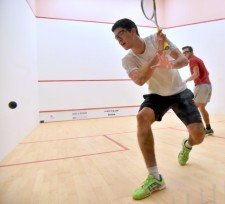 The Boys’ final was more straightforward, but despite top seed and defending champion Diego Elias maintaining his run of straight-game victories it was anything but easy as Yousef Soliman made him work for his second title.

Two strokes and two unforced errors gave Yousef a 4-0 lead in the second, and the Egyptian was definitely into the match no as the rallies lengthened and the retrieving stepped up a level. Diego levelled at 4-all but Yousef had the bit between his teeth, continued pressing and more than held his own as the score reached 8-all. 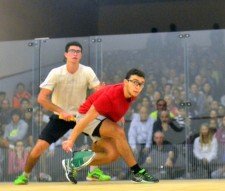 Two Egyptian shots that just clipped the tin gave Diego two game balls, and he took the second of them as a stroke was awarded – a little harsh, some felt – at the end of a scrambling rally.

The third was just as well contested, but Diego managed to stay a point or two ahead, reaching 10-7 and again winning on the second opportunity as Yousef finally succumbed with a volley into the tin.

“I feel very happy to win this title,” said Diego, it’s what you work for. It’s thanks to my supporters, trainers, and family, especially my Dad who pushed me and worked with me, making this happen. 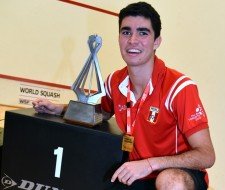 “This has been an important month for me, with the Pan American Games where I played well to reach – and almost win – the final, and now this, “It’s an honour to join the list of people who have won this title twice and I hope I can continue to progress as they have.”

Note: Diego brought the trophy back today,very apologetic that he couldn’t get his win from last year engraved because the plates were full. So what he did was the get new plates made, including the previous winners plus himself ! No apologies needed Diego !!

Photos from the Plate Finals and finals day activities