Match of the tournament 2015

The quarter-finals concluded with an absolute thriller of a match as Saadeldin Abouais just kept on coming back to beat second seed Tayyab Aslam in one of the toughest and longest matches of the week, one which had both sides of a partisan crown at Sports City on their feet at regular intervals. 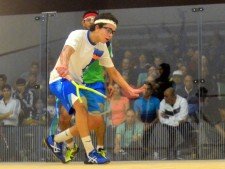 The Pakistani took the first, and at 6-1 in the second it looked as though his speed and precision would win the day. But the Egyptian fought back, taking eight points in a row as he levelled the match, and continued that momentum as he took the third to lead. 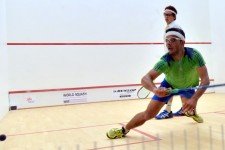 From 4-all in the fourth a series of unforced errors from Abouais made a decider seem inevitable, but again he steadied, pulled back from 4-9 to 9-all, and in a dramatic ending with both players giving their all and each having three opportunities to win the game, it was Aslam who finally yielded as he volleyed into the tin to spark wild Egyptian celebrations.

“Mentally that was one of the toughest matches I’ve ever played – it’s definitely one of the best wins of my career, and I’ve never reacted like that at the end of the match, ever.

“I made 6 or 7 errors in the first, the court was hot and humid, the ball was bouncing so much I jist couldn’t control it. Too many errors and I started the second the same way, I was 6-1 down but managed to hang in and cut out the errors and got to 10-6, that’s what got me started. 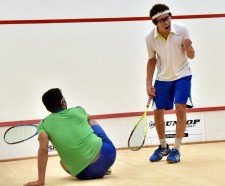 “I felt really good in the third, made almost no errors which made the difference.

“In the fourth it was 4-all then I was 9-4 down with a few errors, I thought it was over, that I would never come back – I still don’t know how I did it! 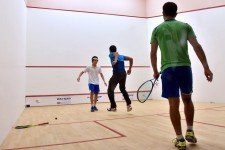 “I’ve worked very hard for this, I was so upset when I lost in the British Juniors from 2-0 up. Aziz told me we’d go back to Egypt, work hard and it would pay off in the worlds, and it has!. 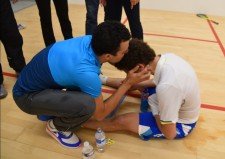 “Aziz is the reason I’m here today in in the semis. Thanks also to my trainer in Egypt Mohamed Fareed, coach Samy Farragh, my new club Wadi Degla and Karim Darwish, and my parents and family of course, who have supported me throughout this tournament and the buildup to it. 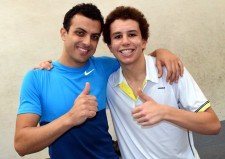 “Now, I need to calm down, I still have a match tomorrow. Hopefully it will be a good one, the pressure is off a bit as an Egyptian finalist is guaranteed. We’re good friends and train together, may the best man win …”

UPDATE: Saad was top seed for the 2016 event, finishing with a Bronze medal