Top eight through to quarters as Malaysia pip Hong Kong 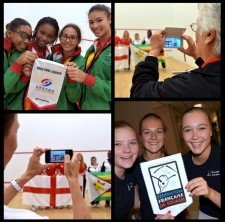 The second day of Pool matches, with four rounds of play and the quarter-final places to be decided. The top eight seeds all booked their places in tomorrow evening’s quarter-finals, with Egypt, USA and England topping Pools A, B and C as expected.

Malaysia came from a game down to beat fourth seeds Hong Kong in the Pool D decider, earning themselves a last eight match against New Zealand while Hong Kong meet England. 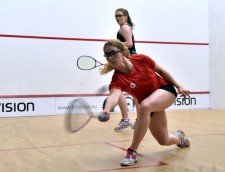 All to seeding in the opening matches, although with the number ones playing first Tinne Gilis was able to put Belgium ahead against France, who duly took the next two ties to seal the win. 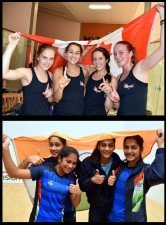 Top seeds Egypt and USA made it two wins out of two quickly enough, but it was less straightforward for India and Canada to stay on course for the quarter-finals against their closest pool rivals Australia and Switzerland.

Lakeesha Rarere put the Aussies ahead in a five-game thriller, but the Indians bounced back to win 2-1. Canada looked to be cruising at 1-0 and 2-0 but  Celine Walser fought back to level the match leaving it to Madlen O’Connor to take the decider for Canada.

Two Pool deciders as England beat New Zealand to maintain their run of 3-0 victories, but in the Pool D decider Malaysia came from one-nil down to beat fourth seeds Hong Kong to top position.

“They all played well,” said Malaysian coach Andrew Cross, “but we haven’t won anything yet, now we need to prepare for tomorrow’s quarter-final.” 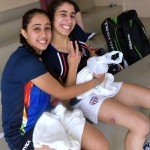 Already through to the quarters with two wins each, Egypt v Canada and USA v India decided the finishing order in the pools, and it was defending champions Egypt and second seeds USA who prevailed to round off the Pools A and B group stage.

Previous TODAY – Teams Day One
Next INSIDE the Teams