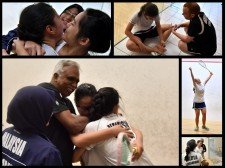 While the top seeds – Egypt, USA and Egypt – all comfortably won their quarter-finals on the third day of team play in Eindhoven, fifth seeds Malaysia made it through to the last four courtesy of a nailbiting win.

Having beaten Hong Kong in yesterday’s pool decider, Malaysia took advantage of the more favourable draw that win earned them as they edged past New Zealand. 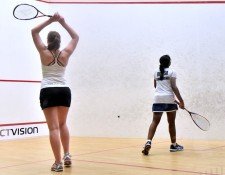 Epke took a two-nil lead but the Malaysian fought back to level, then saved two match balls to force extra points in the decider. Subramanian had a match ball at 11-10 but served out, then tinned on her second chance and itwas Epke who finally took the match 14-12.

“I was feeling so tired in the fifth,” admitted the Kiwi, “I just tried to stay calm and told myself ‘don’t lose’ !” 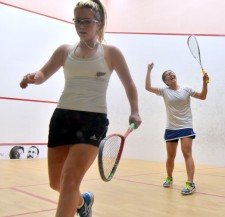 The deciding match between Andrea Lee and Abbie Palmer was equally close, equally tense and exciting. The first four games were shared, Lee led 9-7 in the fifth but Palmer had the first match ball at 10-9. Both were still moving well, keeping the ball in play rather than going for winners, and extra points featured a lot of lets and a lot of tension. Eventually though it was the Malaysian who drove the ball deep into the corner for the victory, 14-12 after an hour’s play.

Manager Andrew Cross was naturally delighted: “Never in doubt,” he joked, what a match!” 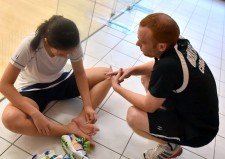 “We got a good start, then Siva went two down but came back to get match ball and served out, which didn’t make me feel good! The decider was such a close match, at the end they were both hitting it hard, keeping it tight but we were lucky enough to win it.

That’s what it’s all about, quarter-finals of the World Juniors, big match, big challenges to see if you can come through.

Hany Hamouda, Vice President of the Egyptian Squash Federation, was wary of being too confident: “People may think ‘oh, Egypt will win’, but we don’t think like that,” he said. “We haven’t won anything yet and we tell the players that they must concentrate and do their best in every match.” 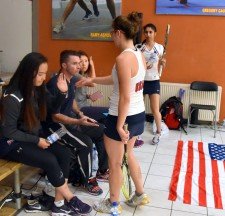 USA manage Scott Devoy was happy with his team: “All the girls played well, they were focused and played disciplined squash. It should give them some confidence for tomorrow, and if we can take that momentum into the match and play as well as that, then we’ll be difficult to beat.”

Their opponents will be England, and their manager Tania Bailey was equally delighted with her team’s performance: “It’s great to reach the semis, that’s what we came here for at least. I’ve been really impressed with the girls, they’re looking strong and have handled themselves well. The nerves built up a little waiting for the Malaysia match to finish, but Lucy handled that very well, and Gina is playing world top 50 squash at the moment.

“We know the USA are all strong, but we believe we can get a result in all three matches, so they’ll certainly be giving it a go and hopefully it will be a great match.”

Malaysia beat the hosts to confirm their position at the top of Pool D, while New Zealand are taken to a decider by Belgium before securing second spot in Pool C – they’ll meet in tonight’s quarter-finals with the winner drawn to face Egypt or India.

Previous INSIDE the Teams
Next Today – Team Semi-Finals