On the fifth day of the WSF World Juniors Team event in Eindhoven, it was somehow fitting that Egypt should make it five titles in a row as they beat USA, for the third final in a row.

The second seeds didn’t make it easy for them though, as Sabrina Sobhy and Kayley Leonard both pushed their opponents to four games after losing the first.

Habiba Mohamed started well against Sobhy in the first match, leading 6-1 and taking the lead 11-7. The American fought back to take the second, but Habiba was simply irresistible in the next two games as she powered Egypt into the lead 11-7, 8-11, 11-6, 11-1.

Salma Hany started well too, also leading 6-1, but Leonard fought back to 6-all and for the next three and a half games there was little to choose between them, and neither could build a substantial lead. In the end the final push came from Salma as she came from 7-9 down in the fourth to complete her 11-7, 11-13, 11-8, 11-9 victory to the delight of herself and her team-mates. 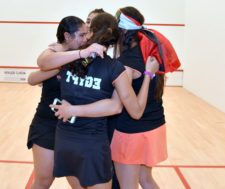 “We are so, so, so, so, so happy to win this title,” said Nouran Gohar, the individual champion who was grateful not to be called on to play the decider.

“Habiba and Salma played really well but at one-all in each match we were getting worried. We told Habiba to do this for Egypt, and at one-all in Salma’s match I thought we were going to lose so I started to warm up. But she managed to win, and that’s really big for us.”

Salma Hany – whose 19th birthday is on the 5th – was relieved and happy. “I was so under pressure,” she said, “some thought I was going to win easily but I knew how tough it would be. I really didn’t want to put Nouran under the pressure of playing a decider, so I didn’t think about anything, just tried to play one point at a time, and when the referee said ‘stroke’ on that last point I just exploded, and then I cried my eyes out.

“Our coaches and the National Federation have helped us so much, put so much into this that it’s the least we could do to repay them. It’s my birthday in a few hours’ time, and I’m so happy to be able to finish my junior career by winning this title as part of this amazing team.” 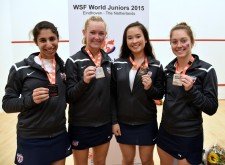 The US players were disappointed to lose, but pleased with their performances:

“We thought we played pretty well,” said Sabrina and Kayley, “we think we got them a little rattled when the games were so close. We put it all out on there and we’re proud of the way we played, it’s a good end to our junior careers.” 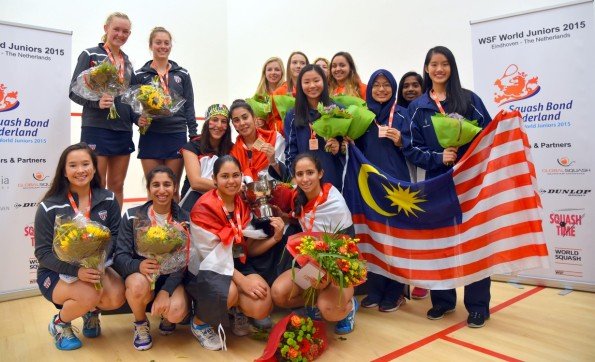