Egypt and Pakistan to meet in the final – again 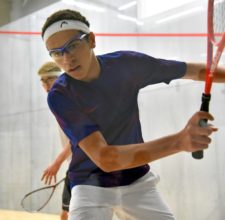 Top seeds Egypt made it through to a seventh consecutive final as they beat England in a match that was probably tougher than they expected.

In the first tie England’s Harry Falconer stayed with Marwan Tarek all the way, and had a game ball before the Egyptian took the lead 12/10. Tarek was in control after that, finishing the tie 11/6, 11/5 as Egypt took the lead. 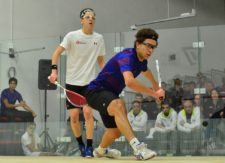 The second tie was even tougher as Charlie Lee came out of the blocks quickly to take the lead 11/6 against individual silver medalist Saadeldin Abouaish.

The Egyptian picked up his game to take the second 11/4 and held off a late comeback from Lee to take the third 11/9.

The Englishman had the upper hand from the start of the fourth though, leading 4-0, 7-4 and then 10-6. Abouaish managed to save those game balls and one more at 10-11 before Lee finally clinched it 13-11. 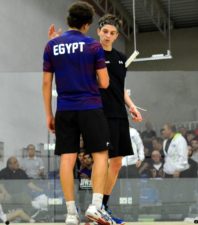 The momentum was with Abouaish from the outset of the decider, and although Lee fought his way back to 7-all the Egyptian pulled away again, taking the match as Lee called his own double bounce.

“That was a really good match,” sais Saad. “I thought I was unlucky not to close it out in the fourth having come back like that, but managed to hold my concentration in the fifth.

“Great respect to Charlie for calling his ball down on the last point, that’s true sportsmanship and real class.”

Second seeds Pakistan reached their eighth final in a row as they ended the fairy-tale run of the USA in two tough ties. 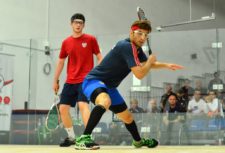 Sam Scherl made a great start as he took the first game in extra points, but once Abbas Shoukhat had settled into his game, the Pakistani’s impressive power hitting and and determined court movement proved too much for the tiring American. 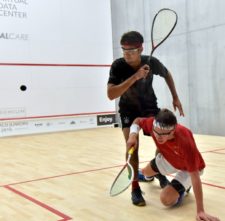 Andrew Douglas put up a great showing against individual semi-finalist Israr Ahmed, leading the first 9-6, the second 9-7 and the third 8-7 before the Pakistani closed out all three 11/9, the match ending on a stroke with Douglas trapped on the floor after a slip.

So, Egypt and Pakistan will contest the final for the seventh time in a row, with Egypt having won four of those meetings, including the last three.

Playoff matches start at 11.00 tomorrow with the final at 15.30 at Enjoy Squash and Gym. 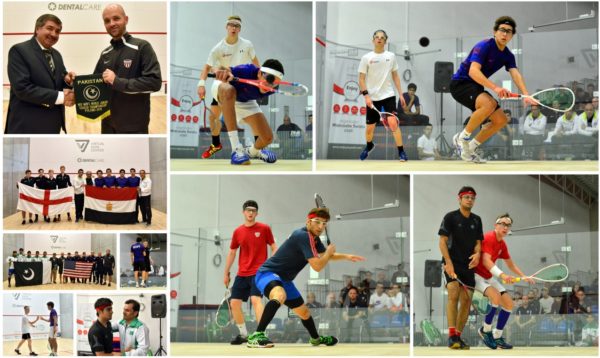 Lots more photos in the Gallery