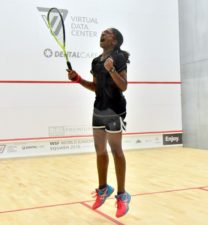 Quarter-finals day at Enjoy Squash and Gym in Bielsko-Bial saw the top four seeds in both events claim their expected semi-final places, five of them Egyptians.

In the men's event top seed Saadeldin Abouaish came from from two-one down for the second day in a row to set up a meeting with Pakistan's Israr Ahmed while Malaysian second seed Eain Yow Ng is through to a meeting with Youssef Ibrahim.

Egypt failed to claim all four spots in the Women's semis for the first time in four editions, Malaysia's Sivasangari Subramaniam joining Nouran Gohar, Hania El Hammamy and Rowan El Haraby in a semi-final lineup the guarantees at least one Egyptian finalist. 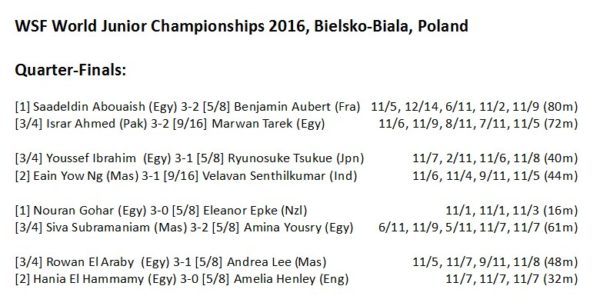 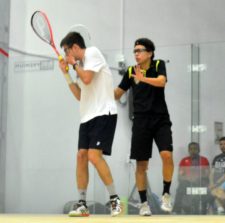 The day kicked off with men's top seed Saadeldin Abouaish, one of seven Egyptians through to seven of the quarter-finals, against France's Benjamin Aubert.

At 5-4 in the first game the Egyptian's racket clipped the Frenchman's face, and play was stopped for treatment. After a while it was decided to continue with the other matches and resume when Aubert had recovered.

That turned out to be after the last women's match, and it finished just short of 12 hours after it started when Aubert put two balls in the tin at 9-all in a tense decider, leaving his opponent relieved and the Frenchman banging the glass in frustration. 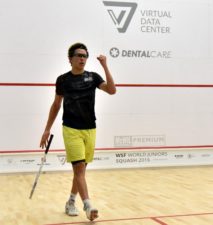 On the resumption Abouaish had quickly taken the lead 11/5 but then lost out a close second – which involved another smack on the head and another blood injury break for Aubert – 12/14 and immediately fell behind in the third as Aubert took the third 11/6. Abouaish, 1-2 down for the second day in a row, raced through the fourth 11/2 and a 4-0 start in the fourth eased Egyptian worries. Aubert fought back though, levelling at 6-all, coming from 7-9 to 9-all before those errors spelt the end of his challenge.

"I've never played a match like that before," said a relieved winner. "So many stoppages, so long, and such a tough match. I'm relieved to come from two-one down again, I'm sure it was great entertainment, but not great to play in!" 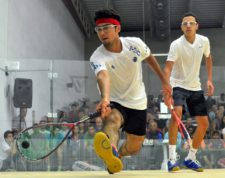 Second match on court was the last remaining Pakistan player, 3/4 seed Israr Ahmed, against Egypt's Marwan Tarek. Israr took the first game fairly comfortably, the second less easily to lead 11/6, 11/9. With the wind in the Egyptian's sails and the play becoming more feisty, Tarek got the better of the third, taking it 11/5, but Ahmed regained control from the middle of the fourth to claim his expected semi-final place 11/5 after 72 minutes.

"I'm really happy to be in the semis," said Israr. "That was a tough match, he's a very good young player and I had to work very hard to win." 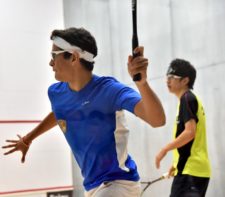 Egypt's first success came as 3/4 seed Youssef Ibrahim beat Japan's Ryunosuke Tsukue in four games, letting the second go after a poor start but being in control for the majority of the other games to take a 11/7, 2/11, 11/6, 11/8 victory.

"It took me a while to get used to the conditions – it's very hot and bouncy today – and to his hard hitting style, but I was playing well by the end." 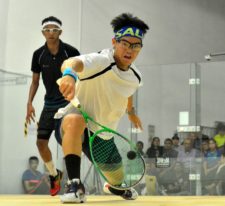 In the only match not to feature an Egyptian, Malaysian second seed Eain Yow Ng also needed four games to fend off the challenge of India's Velavan Senthilkumar in an entertaining match featuring plenty of inventive play and delicate drop exchanges. Ng looked to have the match under control at 11/6, 11/4 but a spirited fightback from the Indian saw him take the third 11/9 before Ng finished off the match 11/5 after 44. minutes.

"He moved me around well today and made me think about how I had to go about the match," admitted Ng. "That was a good workout before the semis, not too easy, not too hard." 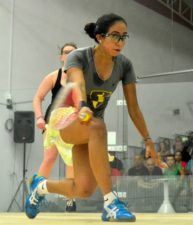 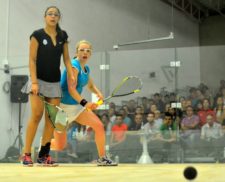 Second seed Hania El Hammamy ended European interest as she beat England's Amelia Henley in three games to seven points, but had to recover from early deficits in the last two games.

"I expected it to be tough and it was," se said, "I had to really fight to win this match." 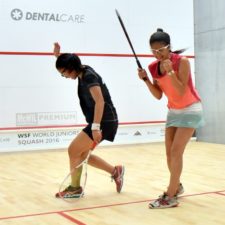 El Hammamy meets compatriot Rowan El Araby for a place in the final after the latter survived a tense four game battle with Malaysia's Andrea Lee. The Egyptian took the first two games 11/5, 11/7 but Lee was growing into the game and capitalised on a good start to the third to take it 11/9 before losing out 11/8 in a hotly contested fourth.

"I'd never even seen her play before so didn't know what to expect," said Rowan, "but that was much tougher than I expected, I'm really pleased to win that and make the semis in my first worlds."

Another battle looms, as the pair have contested three British Junior Open finals in the last four years, Hammamy winning this year's U17 final from two games down. 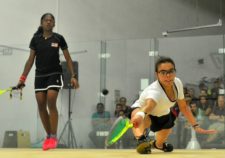 After the first four games were shared the Malaysia made a great start to the decider, leading 6/1 and holding off a determined comeback from Yousry to take the match 121/7 in just over an hour.

"We played in Pakistan last year and I lost 11/9 in the fifth, so I knew it was going to be tough and this one could have gone either way. Really really happy to make the semis," she said.

Playoff matches run from 10.00 for three sessions, with the semi-finals starting at 16.00 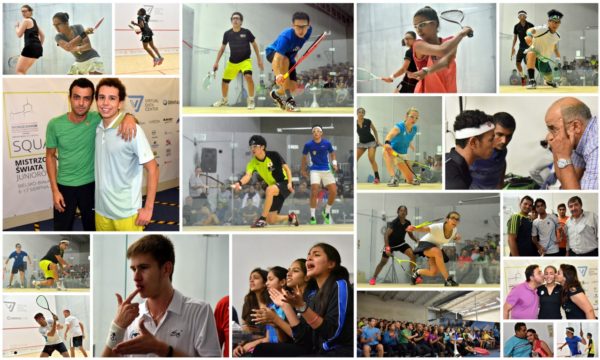 Plenty of photos in the Gallery