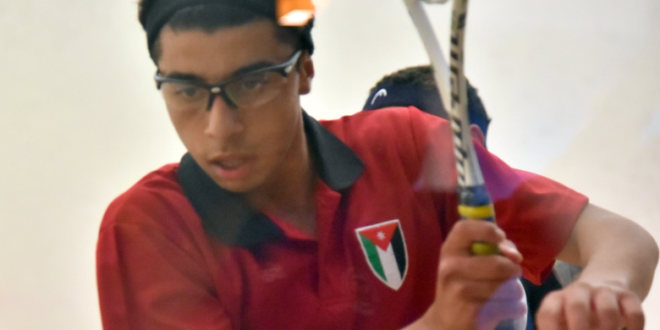 Mohammad Al Sarraj has a chance to make history next week in New Zealand by becoming the first Jordanian to win a world squash title.

The 18-year-old from the Jordan capital Amman is the No.2 seed – but the highest-ranked player – in the WSF Men’s World Junior Squash Championship. The annual World Squash Federation event, together with the women’s championship, will take place at Devoy Squash & Fitness Centre in the city of Tauranga from 19-24 July – followed by the Women’s World Junior Team Championship from 25-29 July.

Currently boasting a career-high world No.89 ranking, Al Sarraj will be appearing in the championship for the fourth year in a row, after making the last 16 both in 2015 and 2016. Expected to meet Egyptian favourite Youssef Ibrahim in the final, he begins his 2017 campaign against the winner of the first round match between South African Luke van Vuuren and home hope Mitchell Kempton.

Teenagers from 26 nations will take part in the 2017 edition of the championships which were first staged in 1980 – with five champions going on to reach No.1 in the men’s PSA World Rankings, and seven topping the women’s list.

16-year-old Hania El Hammamy is top seed in the women’s event – in a draw which suggests that she and three fellow Egyptians will dominate the semi-final line-up!

Local interest is likely to be focussed on Kaitlyn Watts, a 16-year-old from Palmerston North who is the highest-ranked unseeded player in the women’s draw. The world No.152, who made her debut in the 2015 championship and won the Oceania Junior U19 title earlier this year, is expected to face her first seeded opponent, Malaysian Chan Yiwen, a 9/16 seed, in the second round.

Previous Countdown
Next Welcome to Tauranga