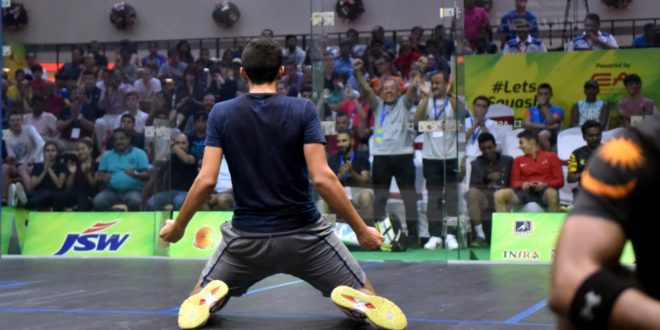 Day FOUR : Quarter-Finals at the Mall

Egypt on the Express train in Chennai

It was a great day for Egypt at the Express Avenue Mall in Chennai as they claimed seven of the eight available semi-final places in the 2018 WSF World Juniors. 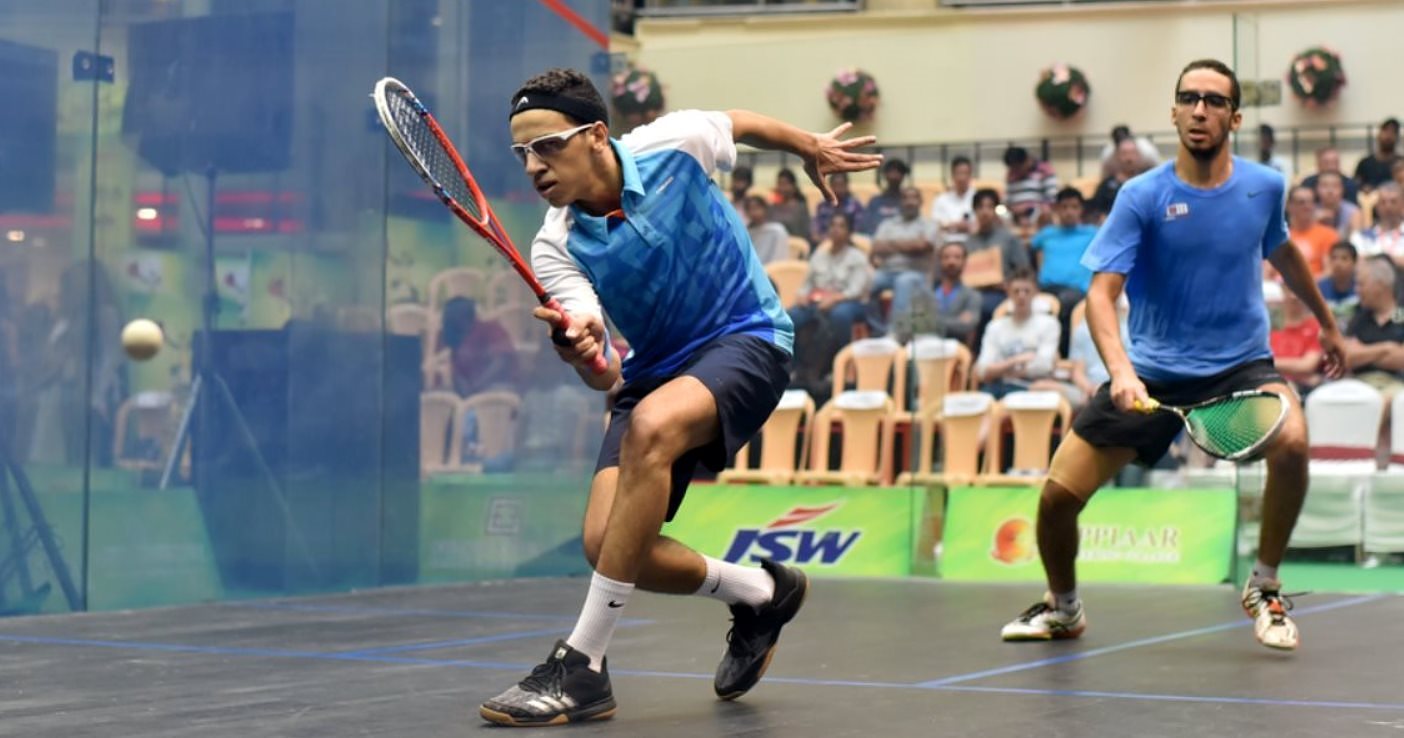 Top seeds and defending champions Marwan Tarek and Rowan Elaraby started the train rolling as they recorded strait game wins over compatriots Mostafa Montaser and Hana Moataz, both being tested in the first game before accelerating through to the semis.

“It’s great playing in the Mall,” said Marwan, even if I was playing one of my best friends. I’m happy with how I played and feel I’m getting better each round.”

“I really enjoyed playing here,” said Rowan, “I loved the crowd watching from all around. There was a bit of pressure when I was down in the first but I managed to get trough it and I’m really pleased to make a third semi in a row.”

Two more Egyptian wins came as men’s 3/4 seed Omar El Torky and women’s 5/8 Jana Shihah won in contrasting styles. After a cagey opening El Torkey raced through to earn a two game and 9-3 lead against England’s Nick Wall, who closed the gap but it was too late to affect the outcome.

Shihah survived a torrid five setter against Farida Mohamed, who had taken out 3/4 seed Aifa Azman in five yesterday. The first four games were shared before Shihah saw a 10-7 lead in the fifth disappear, and saved a match ball herself before finally closing it out.

“It’s great playing in this venue,” said Jana, but it didn’t feel so good when it got tight in the fifth! Farida and I have played probably 50 times since we were 9, in the semis and finals of events even when we’re playing up an age, so we both knew it was going to be tough.”

“I didn’t want another long match like my last ones,” said a relieved Omar, “it’s always a good match aginst Nick but I felt comfortable, I don’t know what happened at the end when I gave away so many points but thank God I made it through!” 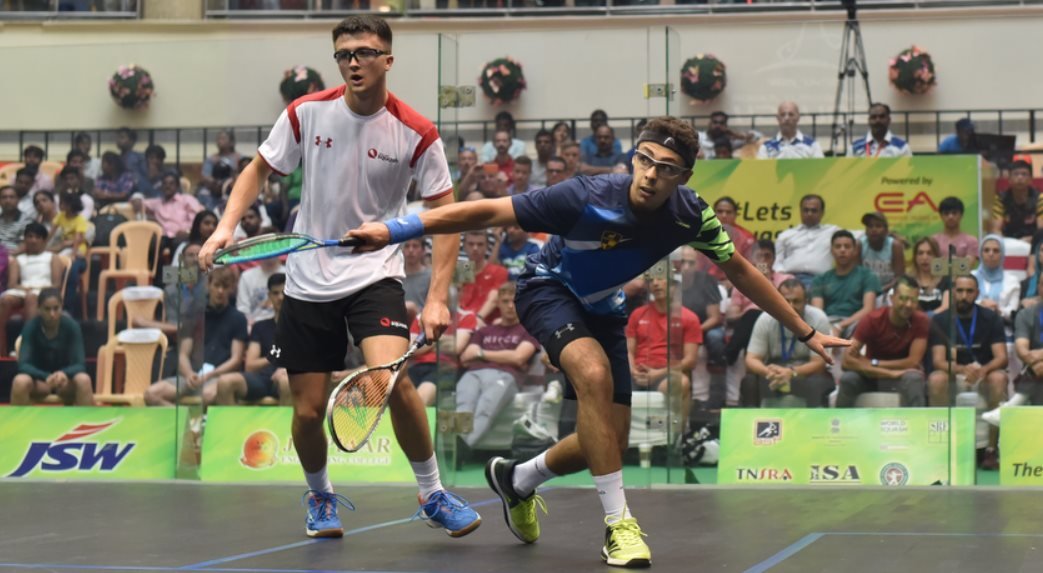 The opening four matches guaranteed Egyptian finalists in the top half of both draws, and Mostafa El Serty made it five for Egypt as he survived in five against Darren Rahul Pragasam. The Malaysian started brightly, and at 2-1 and 10-9 he held a match ball only to see El Serty take te next three points and close out the fifth.

“That was so, so hard,” said Mostafa, I thought I’d lost it and I’m so grateful to come through.” 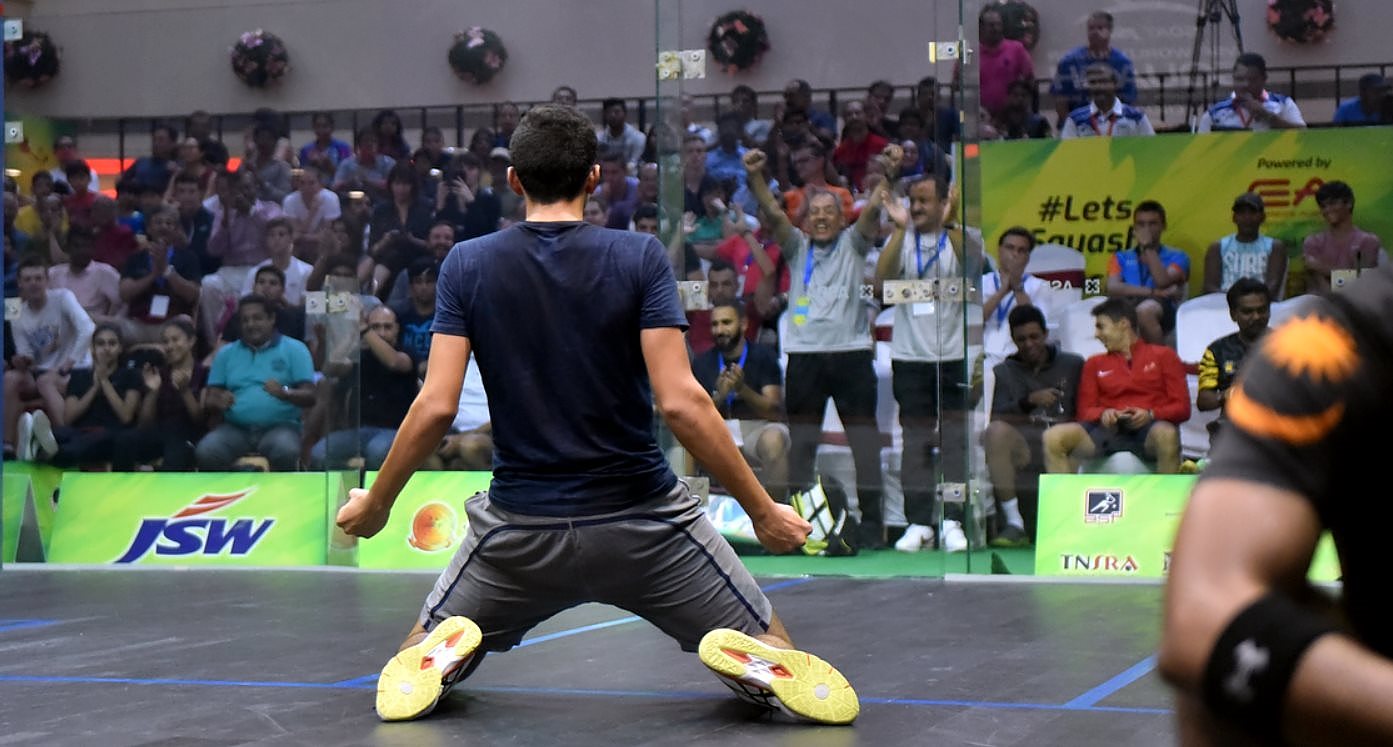 The Egyptian train was stalled, if not derailed, as England’s Lucy Turmel beat Singapoer’s Sneha Sivakumar, the only unseeded player in the quarterfinals, in straight games. 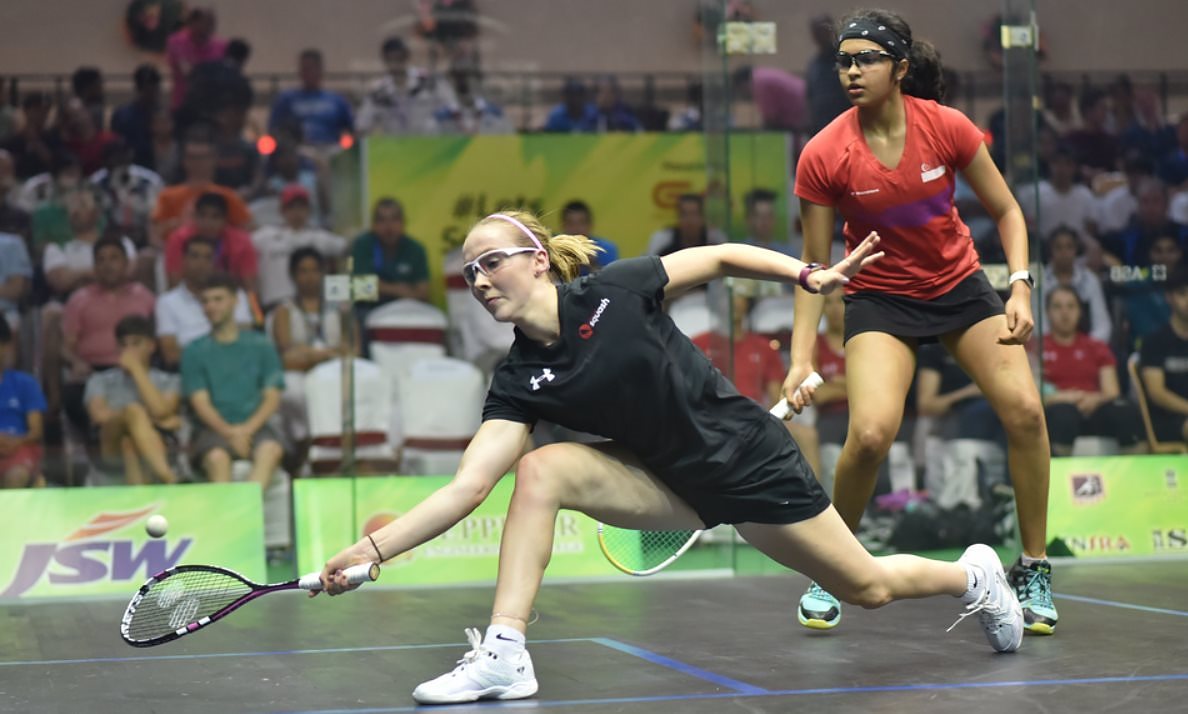 The final pair of matches featured second seeds and the highest PSA-ranked players in the tournament, Mostafa Asal and Hania El Hammamy. Both won in three games, but Asal needed to recover from 7-10 in the first before beating Mexico’s Leonel Cardenas in tree close games, while Hammamy eased past USA’s Marina Stefanoni.

“I am really happy to be through to the semis and am looking forward to a big test tomorrow,” said the reigning European Junior Champion, England’s first women’s semi-finalist since 2012. “The world championships is a great event and I am looking forward to playing on the glass court in the Mall tomorrow as it is a brilliant venue.” 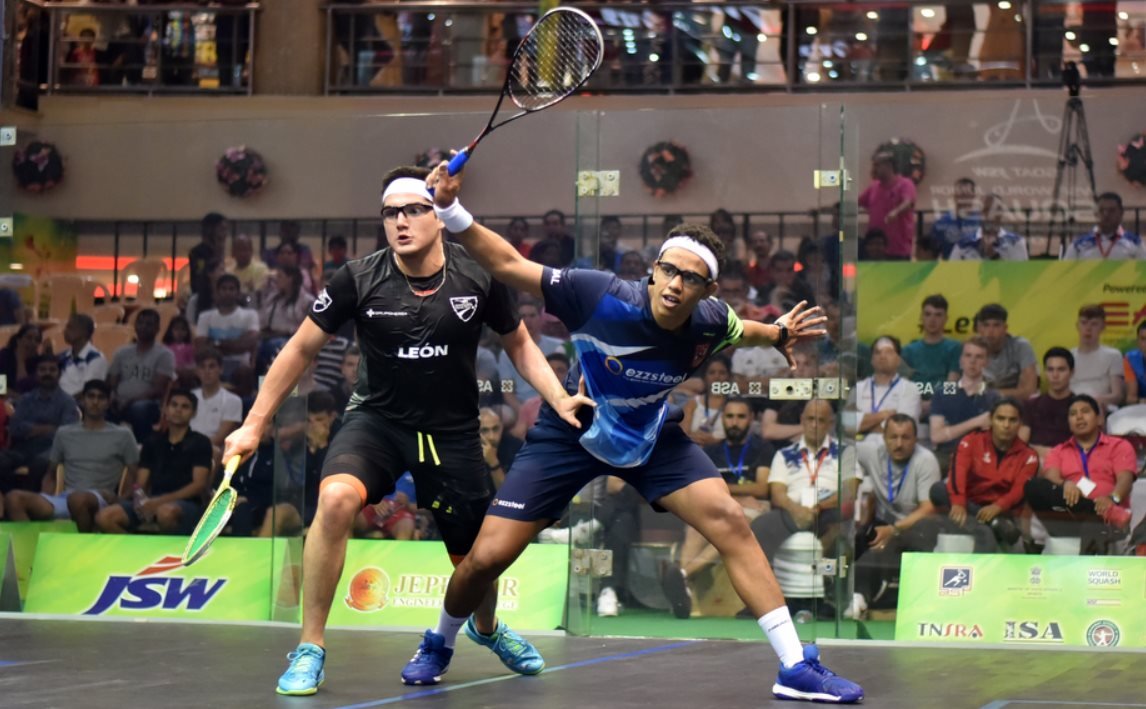 “I thought I’d lost the first,” said Mostafa, “I played him in the semis in Argentina so I knew it was going to be tough, he plays like a PSA player not a junior. I had a plan, but it was hard to put it in place, I’m just glad to et trough in three.”

Hania, like Elaraby reaching her third WJ semifinal in a row, said: “I’m happy with my performance, especially against such a talented player as Marina. She was pushing me to the front so I was happy to get to every one. Another semi, hopefully I can go one better this time.” 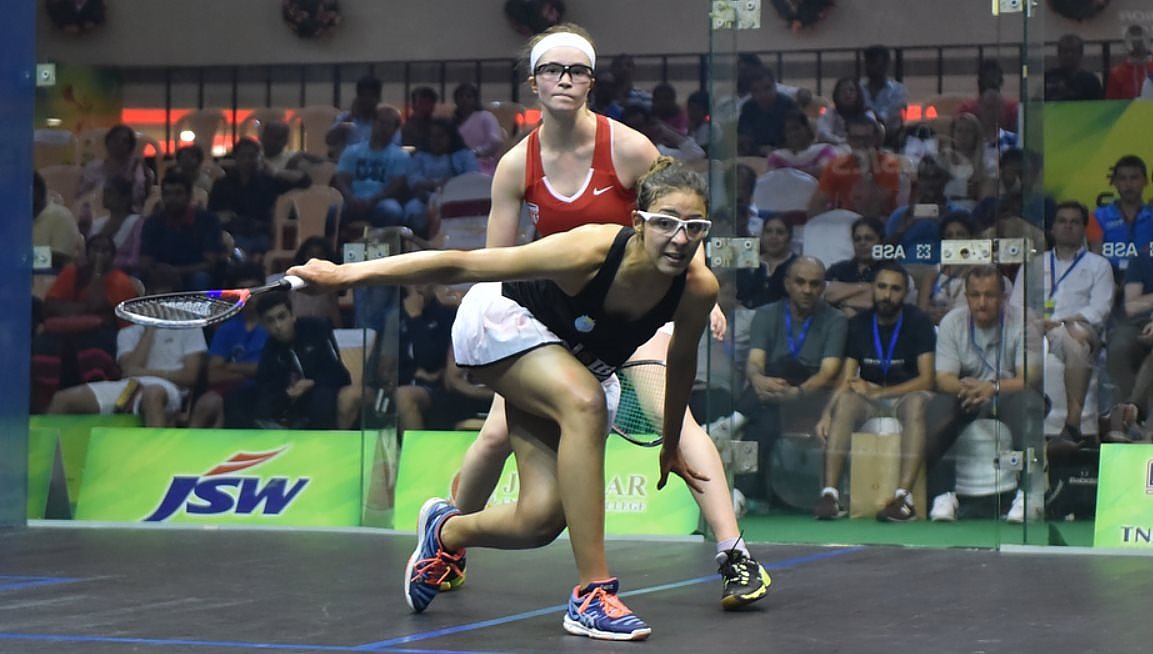 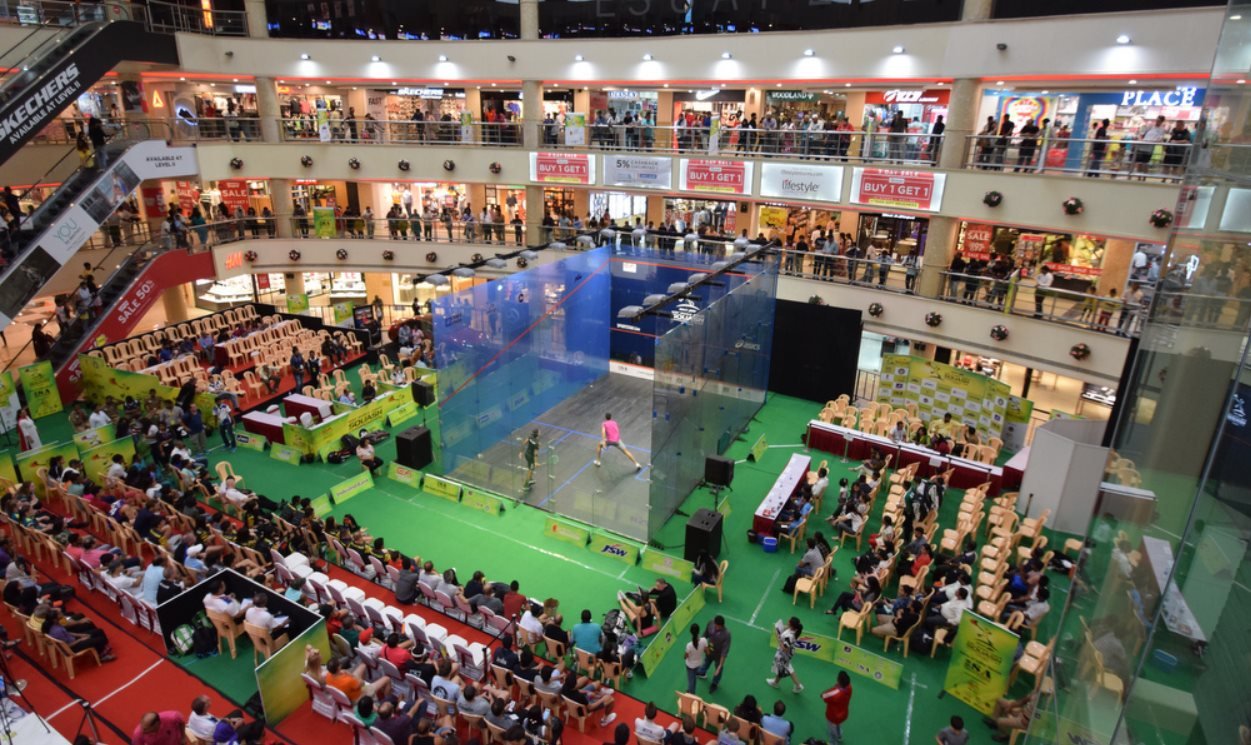