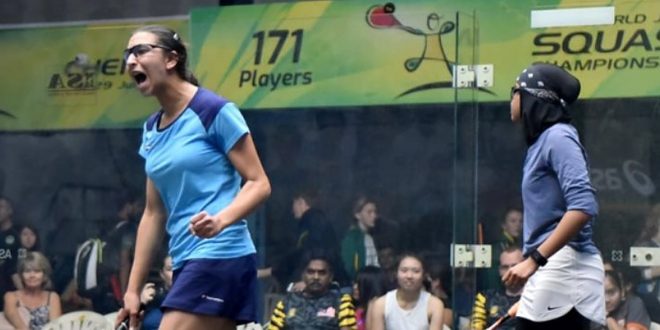 The Men’s and Women’s Individual quarter-finalists were decided today at the ISA, with Five Egyptians through in each draw, and a couple of massive women’s upsets … 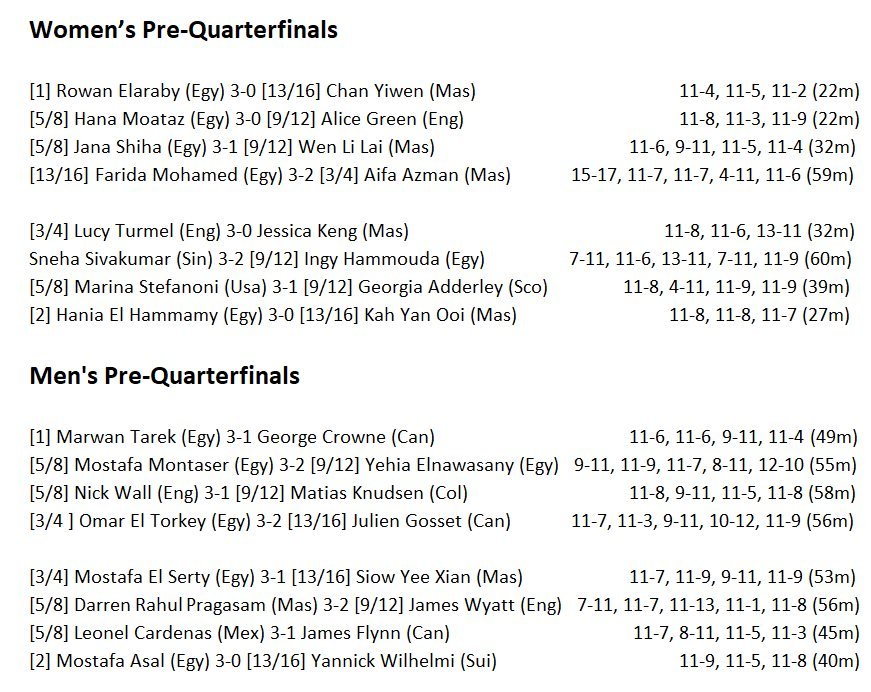 It was an Egyptian clean sweep in the top half of the women’s draw as the Pre-Quarterfinals got under way at the Indian Squash Academy. 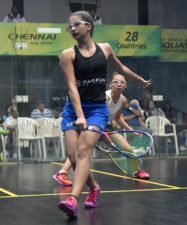 Top seed and defending champion Rowan Elaraby was untroubled as she eased past Malaysia’s Chan Yiwen in straight games.

“I’m not going into it with any pressure, I’m just tring to enjoy the matches,” said Rown. “India is fascinating and the Mall looks fabulous, I’m really looking forward to playing on there tomorrow.”

She’ll meet compatriot Hana Moataz on the glass court at the Express Avenue Mall for a place in the semis, Moataz beating England’s Alice Green in straight games.

Whoever wins that, they’ll face more Egyptian opposition as Jana Shiha and Farida Mohamed meet for a last four place. 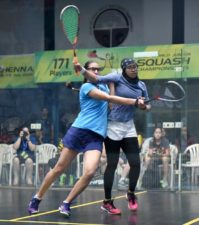 Farida – younger sister of 2014 WJ Champion Habiba – ousted 3/4 seeded Malaysia Aifa Azman in a five-game battle. The Egyptian could easily have won 3-0, leading 10-6 in the first and taking the second and third games both to seven. Azman, the BJO U17 champion, snatched the first 17-15 and levelled convincingly in the fourth, but it was Farida who delightedly took the decider in a physical encounter.

In the bottom half of the draw second seed Hania El Hammamy is the lone Egyptian, after beating Malaysia’s Kah Yan Ooi in three close games.

“I lost leads in all three games but managed to get back to my game plan,” explained Hania. “I’m happy to get to the quarters, it will be first time I’ve played on a glass court in a Mall, it should be a great experience.”

Beaten finalist last year, Hania will meet Marina Stefanoni in the Mall after the US 5/8 seed beat Georgia Adderley in four tough games, the Scot just failing to finish off a fourth-game comeback to force a decider. 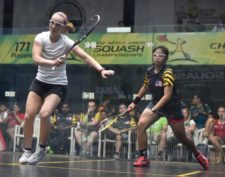 “It was a bit stop and start,” said Lucy.

“I’m excited to be in the quarters and playing at the Mall. Having my own coach Lee Drew here is a big help, and all the team are really benifitting from having Laura [Massaro] here too – she knows what to do in these situation and how to deal with them – even down to things like having two practices before playing on the glass, which I would never have thought of!” 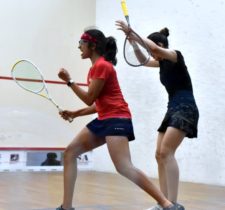 Turmel’s opponent is the only unseeded player in the last eight, Singapore’s Sneha Sivakumar, who came through a five game thriller against Ingy Hammouda to take out a second seed in a row.

“I didn’t think I had a good draw,” said a delighted Sneha, the first Singapore player to reach this stage since 1983. “But it worked in my favour after two tough matches yeaterday and now I’ve got this far without meeting a top four player.

“I never thought for a moment that I’d make the quarters of the World Juniors, I just had to push as hard as I could, at 9-all in the fifth it was crazy, my heart was beating like mad!”

Men: All eight seeds (and five Egyptians) through to men’s quarters

There were no upsets in the men’s last sixteen matches, but a couple of narrow escapes as the eight top seeds boooked their places in the quarter-finals at Express Avenue. 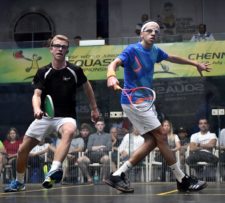 Top seed and defending champion Marwan Tarek dropped a game against Canada’s George Crowne, but was happy with his progress:

“I think I’ve played better each day as I’m getting more used to the conditions. Now for a practice at the Mall!” 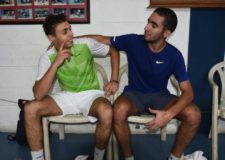 “It was so hard, we haven’t played for two years, but he played so well and I was lucky to win in the end. Hopefully I can be lucky in my next matches and this will be just the beginning!”

Another Egyptian to scrape through in five was 3/4 seed Omar El Torkey, who let slip a two game lead against Julien Gossett, and let slip 9-4 leads in bot the third and fourth before taking the decider 11-9!

“I don’t know what happened,” admitted Omar, “it’s my first time on this glass court and I was feeling a bit sore after two games. In the fifth I just tried to be as aggressive as I could, and thankfully I came through.”

Both quarter-finals in the bottom half of the draw will feature Egyptians – second seed Mostafa Asal eased past Yannick Wilhelmi to set up a match with Mexico’s Leonel Cardenas, while 3/4 seed Mostafa El Serty, with a four game win over Malaysian Siow Yee Xian, will meet another Malaysia in Darren Rahul Pragasam, who returned to court after an injury break in the fifth to beat England’s James Flynn. 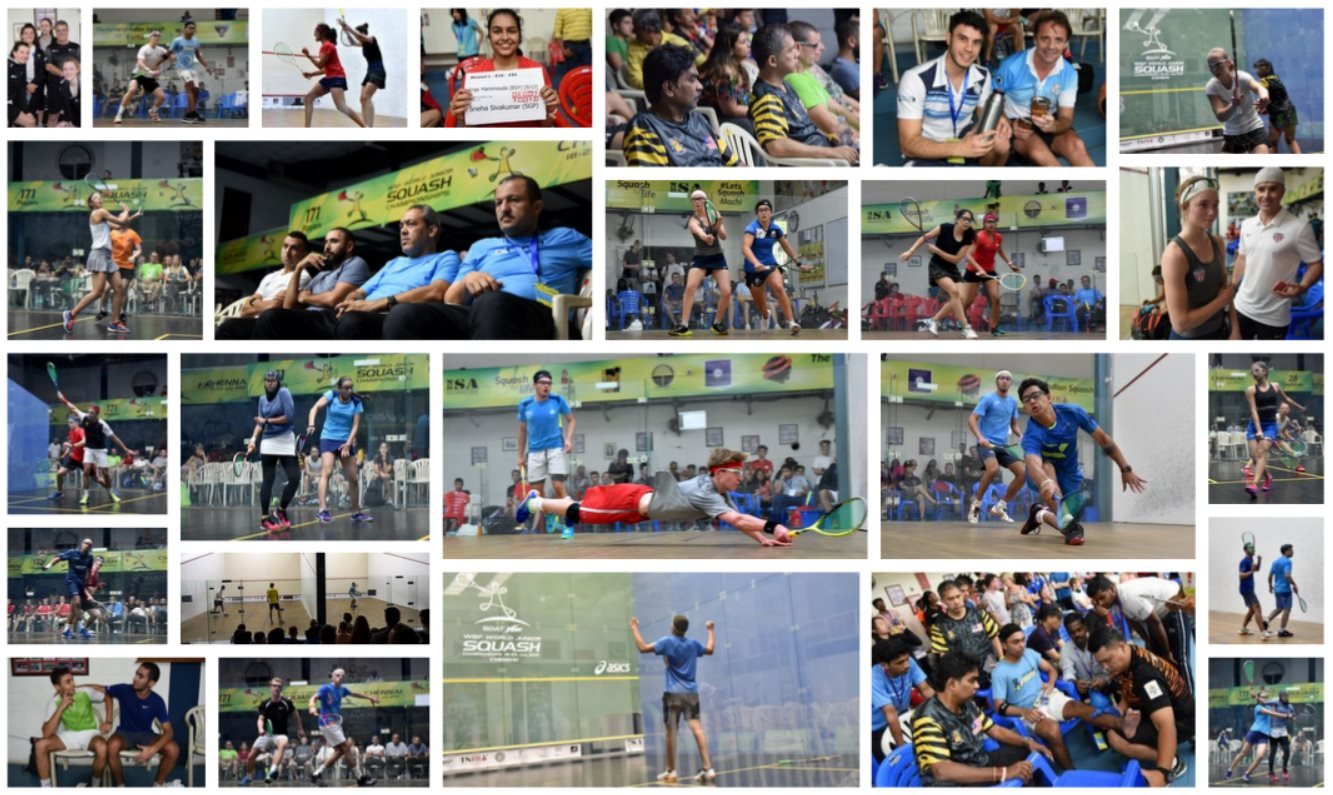