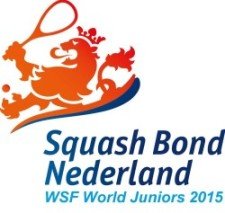 18 nations – from Australia to Zimbabwe and representing all five continents – will compete in the 2015 WSF Women’s World Junior Team Squash Championship which will be held in the Netherlands for the first time in the biennial event’s 30-year history.

Action will take place at the Squashtime Centre in Eindhoven from 31 July to 4 August, following the World Junior Individual Championships for both Men and Women between 26 and 30 July.

The previous championship took place in 2013 in Wroclaw, Poland, where Egypt won the title for a fifth time, beating two-time runners-up USA in the final.

The nations represented in Eindhoven (in alphabetic order) will be: