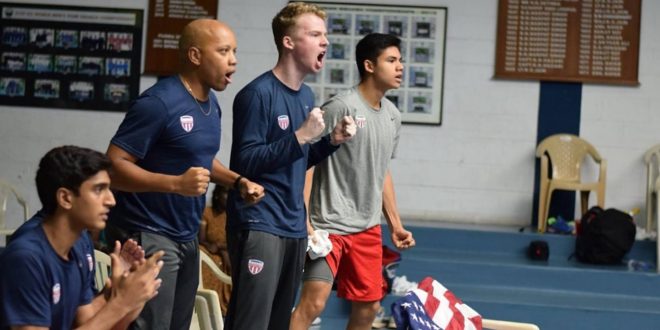 A dramatic quarter-finals day in Chennai saw the defending champions beaten, two upset results and a comfortable victory for the hot favourites.

With both pairs of matches split between the Indian Squash Academy and the Express Avenue Mall, top seeds Egypt, fielding Gold Silver and Bronze medalists from the individuals, took on surprise package Hong Kong at the ISA and, predictably, coasted to a 3-0 win in just over an hour’s play. 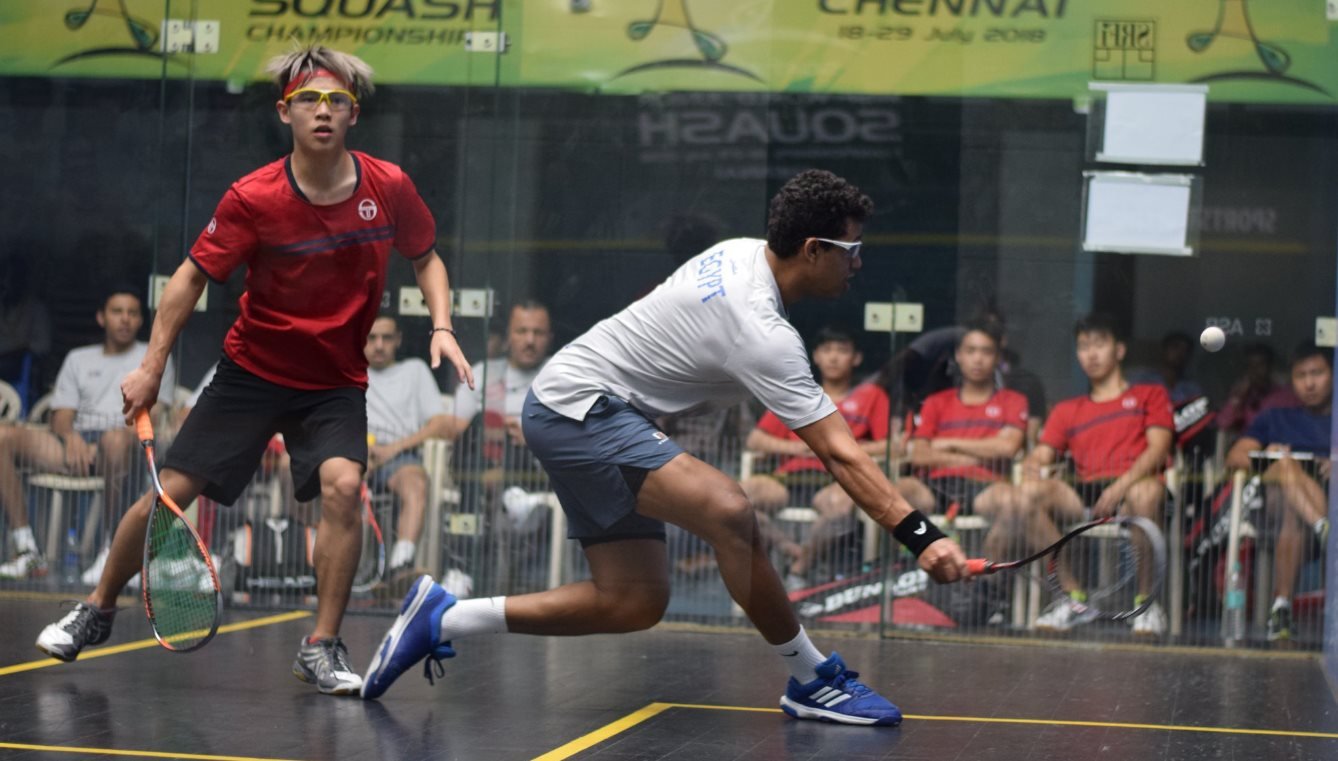 At the Mall fourth seeds Malaysia met the Czech Republic, the sixth seeds playing the event for just the second time after their debut in 2008. With none of their players having competed in the individual event it was the Czechs who started brightly with Ondrej Vorlicek taking a two-game lead and then racing through the fourth to give the outsiders the lead.

Malaysia threatened a fightback when Darren Pragasam edged the opening game in the second match, but Viktor Byrtus found his way into the match, making use of his physical advantage to take the next three games with increasing authority to propel the Czechs into the semis.

“When the draw came out we felt we could progress, but we didn’t want to get ahead of ourselves,” said the Czech team. “Beating the Swiss yesterday gave us confidence, and we knew we had a chance against Malaysia, but Ondrej and Viktor played so well, both finishing strongly.

“It’s an amazing feeling to be in the semis!” said Czech manager Jan Mutina. “At the start of the tournament we wanted to confirm our seeding, yet we overachieved it which makes us very proud and happy. India provides us with a great service, therefore we would like to thank them, as well as the whole management. In the semifinals we would like to show our viewers that squash is an amazing sport, and that it deserves to be on the Olympic games.” 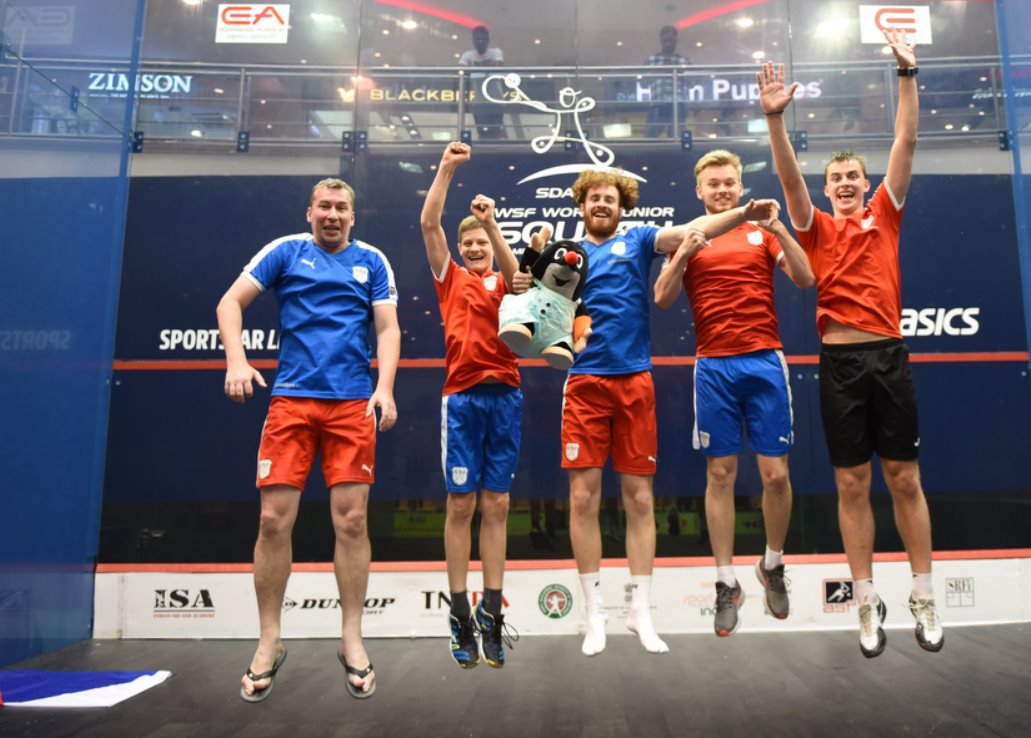 Defending champions Pakistan, having ousted hosts India in a dramatic upset, couldn’t repeat the feat against third seeds England, for whom James Wyatt and Nick Wall notched up the necessary wins – Wyatt in a wildly fluctuating five-setter, Wall getting the better of four well-contested games – before Pakistan reduced the deficit in the dead rubber. 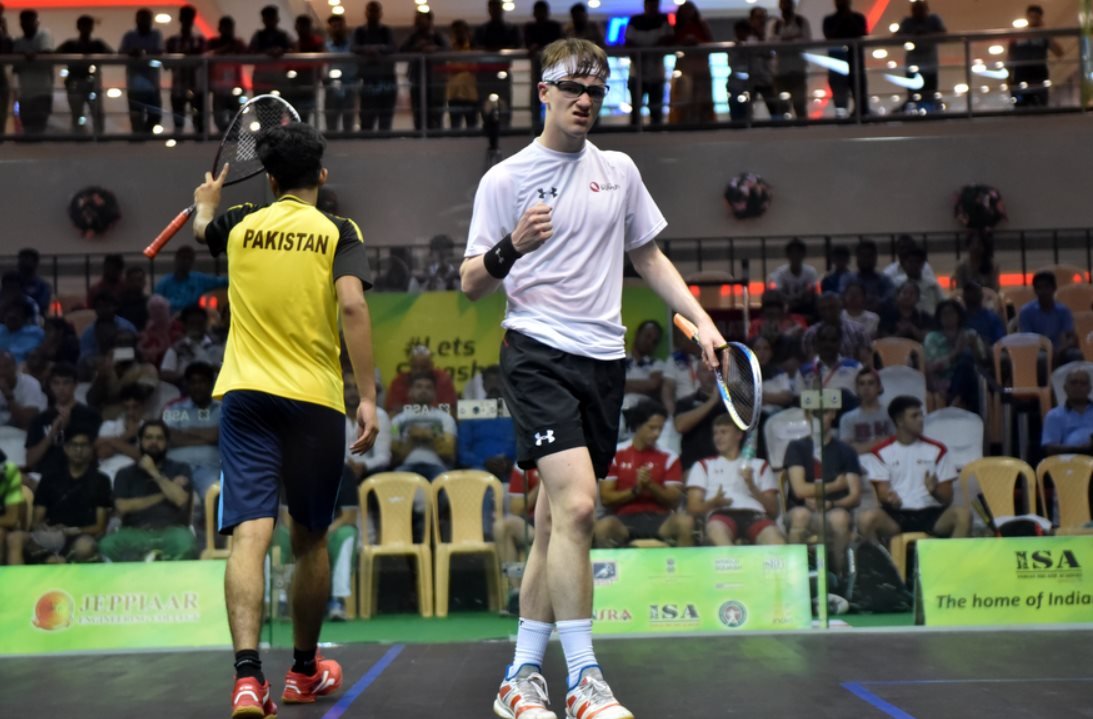 “It’s great to be in the semis,” said England coach Lee Drew. “Pakistan put up a great fight as you’d expect, they would have picked up a lot from last night’s win here over India.

“James held his nerve well and Nick overcame an opponent who was getting better and better as the match progressed, as well as his own problems [Nick had a break to treat a grazed knee] and did well to close it out.

“It’s a question of getting the right preparation now, whoever we play we know that if we play our best we’re capable of beating any of them.”

For Pakistan the loss represents the end of a run of eight successive finals, for England the win gives them the chance of reaching their first final since 2002.

The final spot in the semis was claimed by the USA after a match of unbelievable drama at the ISA. Having lost their opening knockout match 3-0 to Hong Kong, the eighth-seeded Americans took on neighbours Canada, the second seeds.

Tiber Worth got the USA off to a great start, taking the first two game, only to see Canada’s James Flynn recover to claim yet another Canadian five-game victory. 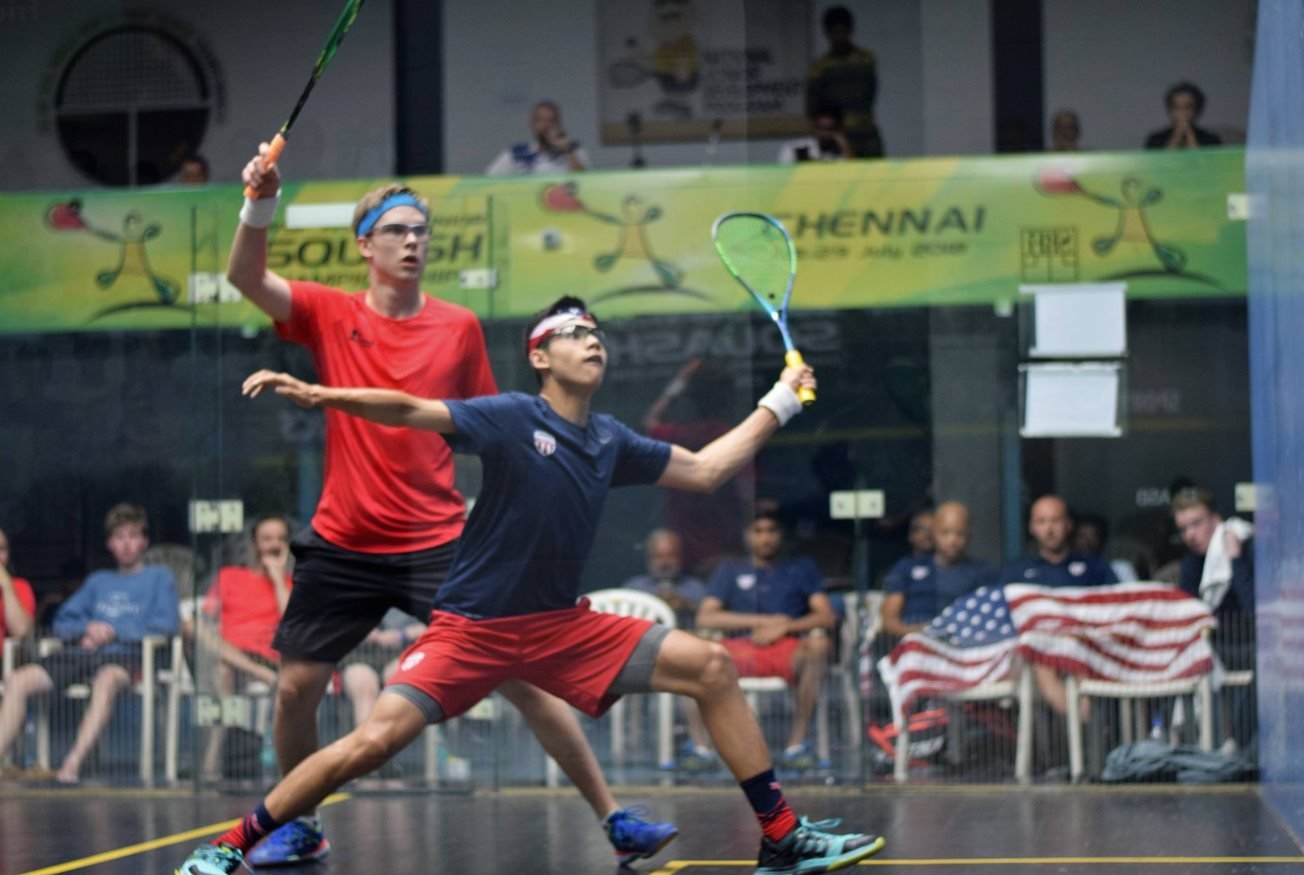 Canada were on the verge of the semifinals when, leading 2-1 and 10-6 match ball, Julien Gosset stretched for a ball, slipped and went down in a heap clutching his hamstring. After treatment he returned to court, but clearly unable to compete and at at 11-10 down he was forced to concede the match to Daelum Majwi [Julien was later taken to hospital, he’ll be out for the rest of the tournament but will be staying on in Chennai].

In the decider it was USA’s Thomas Rosini who emerged the winner in four games as the US team erupted in delight.

“I’m proud of how our team has performed this week,” said Canada’s coach Jonathan Hill, “obviously today wasn’t the best but the US played some great squash and we’ll look forward to the 5/8 playoffs and rebuilding our team.” 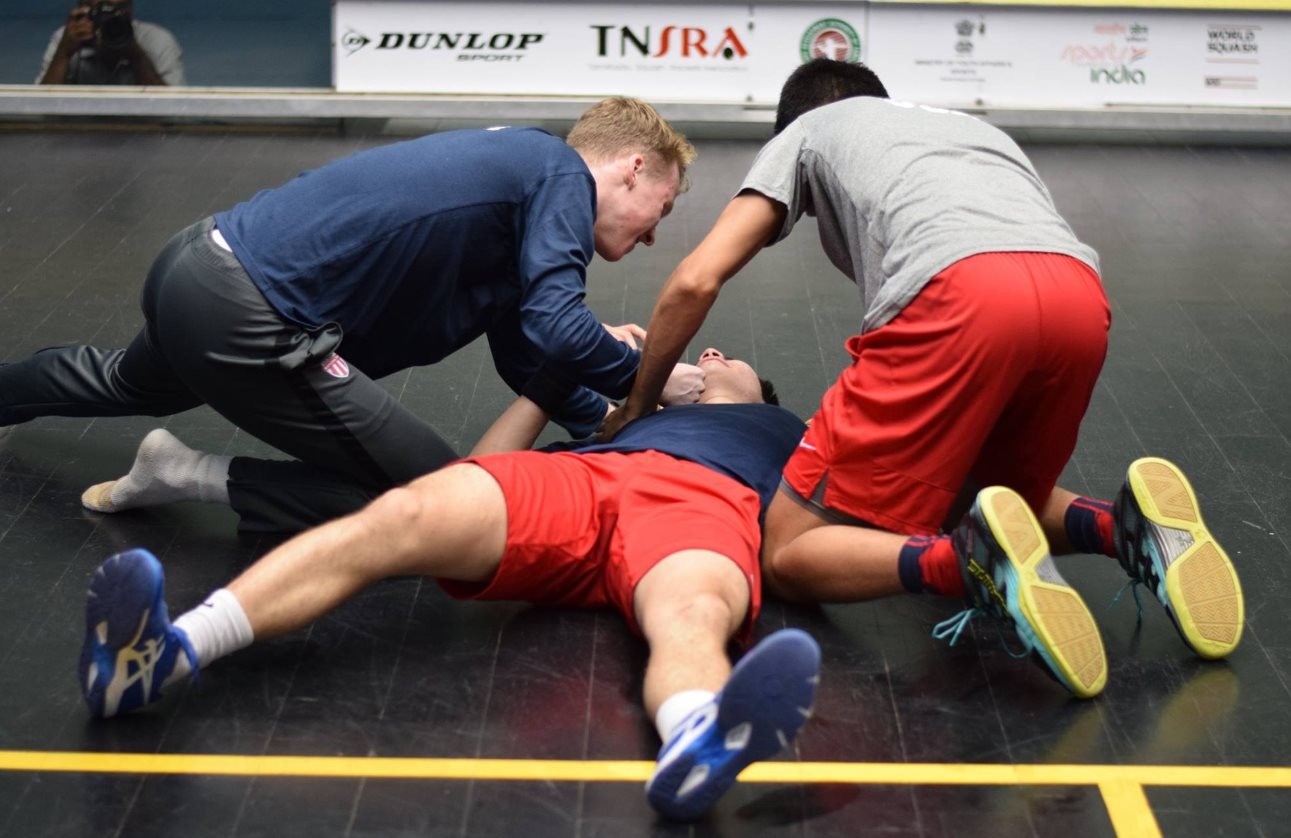 US Coach Simba Muhwati had mixed emotions : “Our hearts go out to Julien, he’d played an amazing match before that injury.

“The emotions involved from Tiber being two-nil up and losing, from Daelum being match ball down and winning, and then Thomas playing so well to put us into the semis!

“It’s a weird place to be, we want to be happy to be in the semis to match our best ever finish, but we feel so much for Julien and Canada.”

In the playoff matches there were significant wins in the 9-16 quarters for Argentina – 3-0 over 7th seeds Colombia – and New Zealand over local rivals Australia, while hosts India got back on the winning trail with a 2-1 win over Germany.