In come the seeds for Round Two 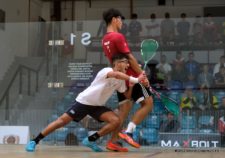 Day Two of the WWSF World Juniors in Kuala Lumpur saw 32 matches in both the Men’s and Women’s draws as the seeded players came into the fray at the National Squash Centre. There were no huge upsets, with the top eight progressing safely in both draws, but it wasn’t a clean sweep in either. 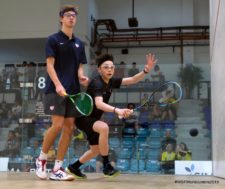 The biggest upset came at the top of the men’s draw as USA’s Nicholas Spizzirri took out 9/12 seeded Kiwi Gabe Yam in straight games. The only other men’s upset saw Hong Kong’s To Wai Lok come from two games down to beat France’s 13/16 seed Toufik Mekhalfi – one of four players to overcome a two game deficit!

There were two seeding upsets in the women’s draw too as Canada’s Brianna Jefferson got a walkover against 13/16 Kaitlyn Watts, and Hong Kong’s Kirstie Wong overcame American 13/16 seed Elisabeth Ross in four close games. 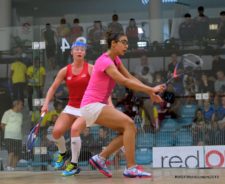 Top seeds Mostafa Asal and Hania El Hammamy led the way for Egypt as all twelve of their players advanced to the next round.

Hosts Malaysia enjoyed a successful day too, with ten victories out of eleven matches, the only one to miss out being yesterday’s sole home winner Adam Agan Bin Aziz !

USA will be happy with nine winners across the two draws, as will England with eight and India with six.

Tomorrow will see the quarter-finalists decided with two rounds of play in both draws.