2011 Boys : Marwan makes it in Herentals 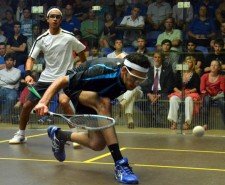 It must have been anything but easy to start this match for Marwan. One, the crowd wanted to see the boy that ousted the Champion do well. Two, never easy to be the favourite. Three. Not easy to be the Brother of a Two Time World Champion.

Yes, that was a lot to carry around for those shoulders.

For Mohamed, though, not that easy either. Yes, no pressure whatsoever, no expectations, but a lovely 70m match a few hours before, plus, the gigantic emotional excitement/drain of beating the reigning champion…

As I expected it to be honest, it all came down to unforced errors. Marwan, 3. Mohamed, 15.

First game, nothing between the players, up to 4/4. Very long rallies, that went straight to Mohamed’s legs. From 4/4, 6 tins in 7 points, giving the favourite 5 game balls, 10/5. Mohamed saves one with a lovely volley drop shot reflex, but Marwan ends the game with a stunning backhand boast, 11/6.

Again, nothing much between the players up to 3/3, then Marwan capitalises on his opponent errors to get quickly to 8/4. Some lovely disputed rallies, with Mohamed attacking at will, and Marwan retrieving beautifully, but then Marwan getting complete control of the T, and Mohamed, doing an awful lot of running…

The third could have been a walk in the park, and it started like it, 5/0 for Marwan. But bless him, Mohamed just clawed in, cutting down the errors, and came back to 6/6. 7/7. The crowd was quite rightly behind the youngest, they want to see more of this. 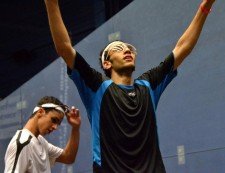 But if Marwan didn’t control his emotions that well at the start this tournament, at this crucial time, he does. He keeps on playing a mature squash, patient, he is lucid, he builds his rallies, applying more and more pressure on Mohamed that is giving his all.

But his “all” won’t suffice, and as Mohamed couldn’t get to a backhand drop shot, Marwan raised his arms in the air, embraced his mate, fell on his knees to kiss the floor and thank God for this victory.

A few long seconds there, then he went out of court, and found his mum in the crowd to share this very emotional moment with her.

Today, History was made I believe, as I do not remember two brothers winning Junior Championship titles at two years interval on top of that!

Not to mention that at SquashSite, we do remember a little boy approaching us years ago, to write reports for us – that Steve spent hours rewriting of course, as his English was a bit approximate at the time, bless him – and who is today World Junior Champion. 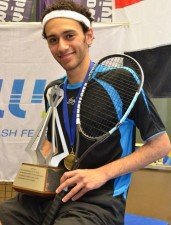 “You know, I had a terrible night last night, I just couldn’t sleep at all…. This was a very difficult match mentally, as Mohamed and myself are best friends, and we know each other’s game so well, we’ve been playing each other since we were 10!

There are so many Egyptian world juniors champions, we keep it going, and teach each other the game of squash!!!

I’m so happy right now, I’ve been dreaming of this since I was ten, and when I saw my brother getting his first title in Switzerland, I wanted so much to win too …”