Aussies in the Quarters

Last night we faced off with the 2nd seeds Pakistan. The depth of the team was pretty intense as you would expect from a country with such great Squash History. The match was set for 8pm local time on the glass court in the main square in the city centre which was a great spot to host the court.

We had a practice in the daylight sun around noon to get a feel for the court as it was pretty tough to see the ball. The boys were excited to have the chance to play in such a match against old rivals and in such a beautiful setting.

As 8pm rolled around the formalities begun with photos and flags and Kangaroos being positioned and the atmosphere was great! The order of play was 2-1-3 and we had decided to rest Joey Mojo after his big 3 days of exhausting matches and bring in Will Curtis.

Alex “Cats” Oswald, looking as cute as his picture posted on Facebook in the morning, was escorted to the court first arm in arm with the traditionally dressed super model. And showing great chivalry, Cats allowed her to open the door for him as he strutted onto the court to come to stand arm in arm trying to hide the ridiculous grin on his face… His opponent entered awkwardly with his much better looking human and the warm up began. 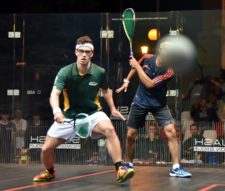 The pace was fast to and it looked as though both players were trying to get a feel for the court and the big difference between the style of play from traditional hard courts that we had spent the previous 3 weeks hitting on. But it was Pakistan who drew first blood by stepping up and being more assertive with the attacking. Alex dug in and started to utilise the straight drop as suggested and forced more loose balls to put the pressure back on. The boys played some great rallies but in the end it was the Pakistani who steadied and took the 2nd and 3rd putting us 0-1 down going into the 2nd tie. 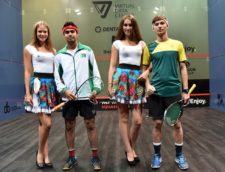 Alex Eustace surely looked pumped for the match and extremely upset with himself at the same time for not learning Polish before coming to Poland, as he was brought to the court by the non-english speaking beauty that just seemed to look down at him from a few inches higher thinking "you are a silly, cute little boy” (that part sounds better if you say it with a Polish Accent)

His opponent reached the last 8 in the individuals and narrowly lost to the number 1 seed so we knew that it would be a tough battle for Alex but he as always was up for it! The first game seen Alex a little shell shocked as the pace and speed off the glass court took him by surprise allowing to many loose balls to sit up for his dangerous opponent. 1-0 to Pakistan. 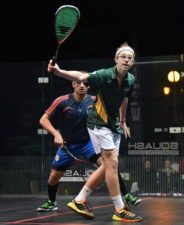 Alex came out fighting in the 2nd finding his length and getting in front to attack the ball going short forcing his opponent to chase and be more patient. Ultimately It seemed that that patience and experience allowed him to take the next 2 games to give Pakistan the 2-0 win and move forward closer to reaching their 2nd seeded draw.

Will Curtis played the dead rubber going down 0-2.

A great experience for the boys to play against the calibre of the Pakistan team and to do it in front of a great crowd on a great court in a spectacular setting!!

This moves us into the playoff now for 5th spot. 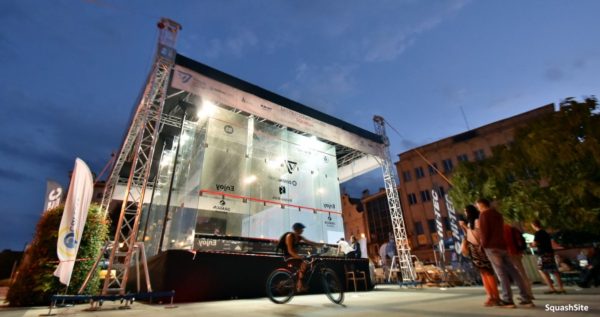