Five years ago as a young boy in Toulon, Victor Crouin took on All Blacks great Tana Umaga in a game of squash. He won.

Now he’s hoping a bit of Kiwi magic helps him pull off an unlikely win at the World Junior Squash Championship in Tauranga. 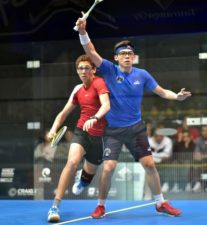 Crouin, 18, is through to the semifinals after a tough quarterfinal match against Egypt’s Aly Hussein to set up a semifinal against Jordan’s Mohammad Al Sarraj on Sunday after the second seed beat Egypt’s Mostafa Asal in straight sets.

“I’m very happy to have made the semifinals for the first time,” Crouin said. “Being seeded three, the semifinal was a minimum for me.

Crouin said he felt no pressure in the quarterfinal but admitted Hussein’s habit of blocking and running into him wasn’t a natural part of his game. 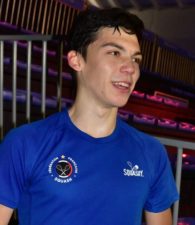 Crouin’s brush with an All Blacks great happened because Umaga’s Toulon rugby club often used the facilities at Crouin’s squash club and the chance to tackle the former test skipper on a squash court was too good to turn down.

He was in awe of Umaga’s size, but joked the wing turned centre couldn’t match the then 13-year-old French lad’s speed.

Crouin said he had enjoyed being in New Zealand in his first trip outside Europe. “The people have been very nice, hopefully they are on my side.”

He will need that support against the Egyptian tomorrow as they’ve proven to be physical and fiery throughout the tournament. 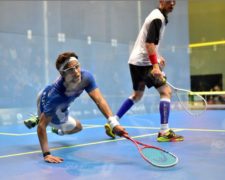 Top seed Youssef Ibrahim was all of that and more as withstood a fierce comeback from American Andrew Douglas to win a testy match in five.

Having led 2-0 in relative ease the Egyptian went off the boil, letting Douglas back in, before he eventually won in dramatic fashion diving and scrambling across the court for the penultimate shot before hitting the winner, sealing the match 11-9.

Ibrahim said he dived because he was worried if he called for a let, he wouldn’t get it. “I just knew I had to hit that ball.” 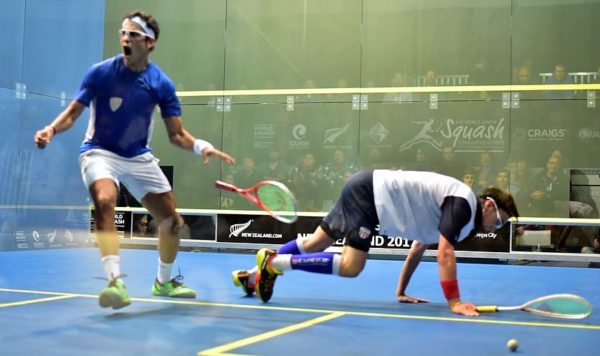 The 18-year-old top seed thinks he is coping better with the pressure of being the favourite but wasn’t looking forward to playing close friend Marwan Tarek in the semifinal on Sunday.

“Egyptians don’t like playing each other but this is the worlds so we have to go with the draw.” 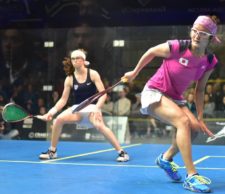 The 16-year-old Egyptian was made to work hard by Malaysia’s Sivasangari Subramaniam before winning 3-2.

Subramaniam wasn’t helped when she was injured after she ran into the end of the handle of El Hammamy’s racquet in the fourth match when she was ahead two games to one and trailing 5-4 in the match. 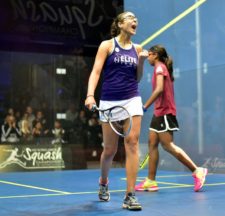 After a lengthy delay to staunch bleeding in her mouth she lost the match 11-6 and went down 11-1 in the fifth.

On the other side of the draw Egypt’s Amina Yousry was too good for countrywoman Zeina Mickawy, winning in straight games.

She will play another Egyptian, Rowan Reda Araby in the semifinal after her 3-2 win against Malaysia’s Andrea Lee.