There were just four teams left in contention for the team title in Namibia today – the top two seeds and two surprise packages.

While defending champions Egypt and second seeds Pakistan were expected to make the semi-finals, Malaysia‘s win yesterday means that for the first time ever England were not in the semi-finals, while Spain‘s win over India guaranteed them a best-ever finish.

Four time champions Pakistan made it through to their fourth final in a row with a 2-0 win over Malaysia, while defending Egypt were tested by Spain in both matches but nevertheless won through to another final. 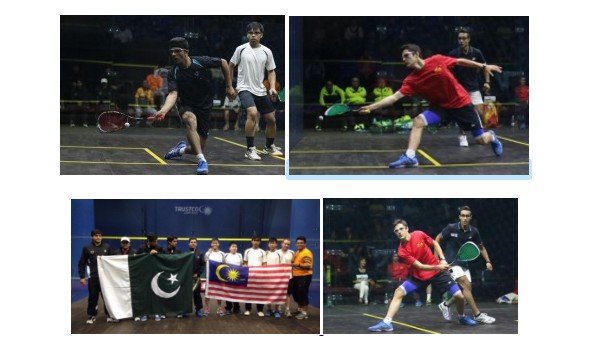 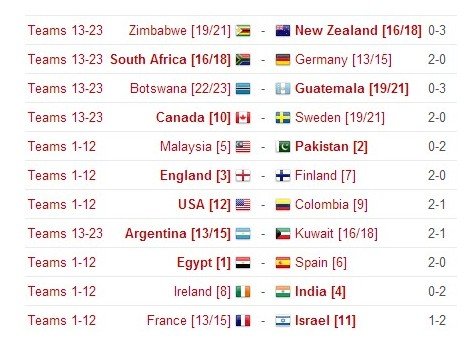 Down to the wire in team semis

It’s down to the wire as big guns at the World Junior Squash Championships for teams are now eagerly waiting for the semi-finals to kick off at 18h00 later today.

The semi-finalists are favourites Egypt who meet Spain which dispatched India, who were also hot contenders for the semi-final spot, while the solid Pakistani side goes up against surprise package Malaysia.

The action on Centre Court in the only glass court in the country, starts at 15h00, with Malaysia to put Pakistan to the test, while Egypt must show their muscle if they want to dismiss Spain in the subsequent match.

In their semi-final match, Malaysia’s Darren Chan Ti Luun had the shortest encounter against England’s Patrick Rooney, while his team mates Mohammad Syafiq Kamal and Eain Yow Ng had marathon sessions on their way to beat England.

Malaysia beat England 2-1 in possibly the biggest upset yesterday, but the Malaysian youngsters face a bigger challenge in Pakistan, who easily buried Finland, winning 2-0 in their semi-final encounter.

But there is also much to be expected from the Spaniards who fought their way back into the game after India’s number one Kush Kumar opened his country’s account with a win in the first match.

After battling for 73 minutes to secure victory in the first match, Kumar watched helplessly as both Madhav Dhingra and Vijay Kumar Meena succumbed to consecutive defeats, with Spain winning 2-1 in the end.

The pressure will now be on Egypt today though, as Spain will go in as underdogs, but the quality of players could be even.

Spanish players showed and exceptional fighting spirit to come back from 1-0 down to secure victory against India and that also underlines their desire to walk away with the title.

Their determination can just pull it off, but Egypt has big match players who can raise their game anytime, no matter the opponents.

The 2014 individuals finalist, Omar El Atmas with Youssef Aboul-Makarim and former world champion Karim El Hammamy, are the three top players for who must take responsibility for Egypt, while Edmon Lopez, Iker and BernatJaumehave little choice but to bring out their best for Spain.

There will be several other play-offs at 15h00 and the ones standing out include England against Finland, Ireland versus India and Canada taking on Sweden.

Hosts Namibia got a bye and will play the winner between Botswana and Guatemala for 21/23, while Zimbabwe, South Africa, Germany, New Zealand, Argentina and Kuwait are all in the mix.