While an Egyptian winner is already guaranteed in the Girls’ event, four nationalities can still grab the Boys’ crown in Namibia.

The first semi-final proved to be a real thriller, as 15-year-old Habiba Mohamed came from two games down to beat defending champion Nour El Sherbini 13-11 in the fifth after 94 minutes !!!

No such problems for the Boys’ top seed Diego Elias, who eased past India’s Kush Kumar in straight games.

In the final match of the day Omar El Atmas made it three Egyptians in the finals as he overcame Syed Ali Bhukari in four close games. 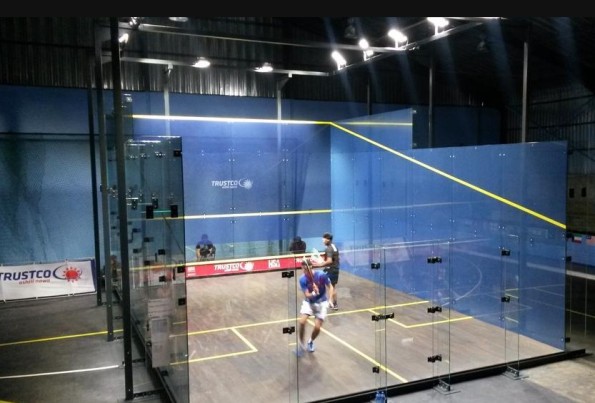 Upsets and drama on Centre Court in women’s semis

Red-hot favourite for the title Nour El Sherbini bowed out in the semi-finals at the hands of her fellow-countrywoman, Habiba Mohammed, who made it through to the final  in a thrilling encounter that had the Centre Court packed to the rafters.

The match was marred by obstructions from both players, while they also back-chatted to referee Rajiv Reddy who had a tough day from one of  the most competitive matches of the tournament.

Mohammed fought her way to victory after she was tested to the extreme by El-Sherbini who seemed destined to wrap it up in straight games after leading 11-8, 11-5. 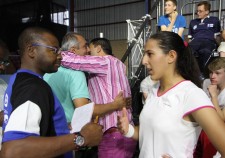 Apart from the tough calls that Reddy had to make, play was also delayed 12 minutes in total after both got injured in separate games. Mohammed was the first to ask to be treated after she hurt her back as she tried to reach for the ball when the match stood at 2-all, while El Sherbini suffered a knee injury on court, but both received treatment and continued with play.

“I did not expect to win at all, I never felt like this before,” said Mohammed after the match. “I am super excited. But despite being a bit unsure of my chances to win, I later I told myself that this match was not over until either of us wins it. I pushed myself and gathered more confidence as play went on. She really gave me a good run and I respect her because she is a strong and very committed player. But there had to be a winner.”

El-Sherbini could not contain her tears after the match, saying: ‘it was the worst match that I ever had’…further stating that the decisions by the referee were in some cases not justified.

“There were a lot of decisions that were very bad, but I congratulate Habiba for her performance. She is young and a very talented player and I wish her all the best in her career,” she added.

Mohammed now meets another fellow-countrywoman, Nouran Gohar who was also put to test by another Egyptian, Mariam Metwally in a match that finishes  11-9 11-4 116 11-0.

El-Sherbini loses out on the chance of a historic fourth consecutive title win, putting either Mohammed or Gohar at the edge of claiming it when the final is decided on Friday.

Elias shows no mercy for Kumar

The semi-final encounter between Diego Elias of Peru and India’s Kush Kumar  could have been a tight affair if the Indian had not shown too much respect on the court towards his opponent.

Despite chasing each ball and trying to tie down Elias with lob-shots and putting him in tight angles, Kumar went down 11-5, 11-7, 11-4 in what could have been even a more exciting match if he had held on for longer. 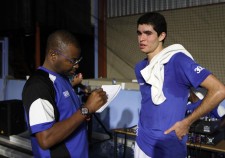 The Peruvian youngster showed no mercy and killed-off any attempts by Kumar who seemed to have calmed down in the last game, with Elias eventually snapping up victory in just 42 minutes.

“I think in general it was a tight match and could have gone either way,” said Elias after the win. “But I kept my head up and focused on working hard by reaching out wherever the challenge was knowing the strengths of Kumar. He is the best junior in India and what happened today was pretty much what I was expecting,” .

He added that for the final, he hopes to event improve much more in all aspects of the game and considers himself in top form at the moment.

Kumar was disappointed after the game and stated that he tried giving his best, but there was no room for him to bring down the cool and collected Perivuan youngster.

“I really tried my best to send him around the court, but he always responded to each situation and that made it difficult for me to contain him. He has a way of making things look easy and that makes him an excellent player,” said Kumar.

Kumar became the first Indian to reach the semi-finals of the junior individual competition ever and he feels that it is a great achievement and to him, that underlines his performance throughout the tournament.

“To be honest, I am happy with the way I played throughout this tournament. Overall, Im having a great time in Namibia .. the weather is great and people are very friendly and reaching the semis tops it all. I’m really happy with myself,” he added. 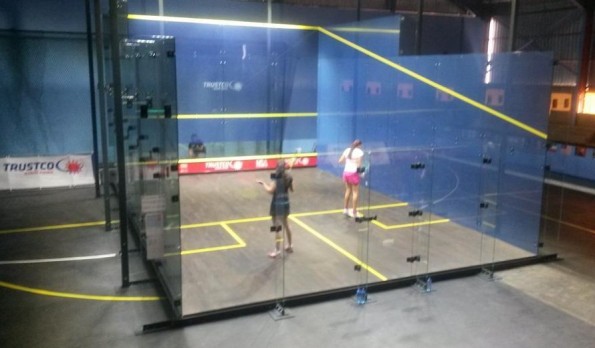 Appearing in her sixth successive World Junior semi-final, Nour El Sherbini is red-hot favourite to retain her title and make it four World Championship wins, but in Habiba Mohamed she faces a fast-rising  powerful opponent with four British Junior Open titles already under her belt.

Second seed Nouran Gohar is in the semi-finals for the first time, up against Mariam Metwally who will be keen to go one better than last year’s runner-up spot.

A new Boys’ champion is assured, and there’s a 75% chance that the Egyptian stranglehold on the event will be broken. Top seeded Peruvian Diego Elias meets fast and skilful Indian Kush Kumar in what should be an intriguing clash of styles.

While that was predicted by the seedings, the other semi-final between Egypt’s Omar El Atmas and Pakistan’s Syed Ali Bukhari certainly wasn’t. Both had marathon wins yesterday so it’s a good job they’re on last.