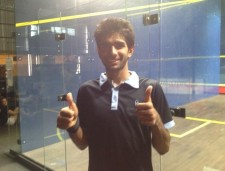 Next came a little all-Egyptian upset as Habiba Mohamed beat Salma Hany. Mohamed squandered five game balls before edging a combative first game 12-10 but was always in control in the second and third. 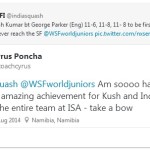 India’s Kush Kumar was always ahead against George Parker. Despite the Englishman’s best efforts the Indian 3/4 seed’s speed around court and deft shotmaking proved decisive. Kush becomes the first Indian ever to make the world junior semis, while George will probably need a new racket for his next match.

In the evening session Mariam Metwally and Nouran Gohar made sure that there will be an Egyptian girls’ champion as they beat Georgina Kennedy and Sabrina Sobhy, both in straight games, to complete Egyptian domination of the semi-finals.

The first boys’ match of the evening was a marathon, and also saw an Egyptian winner as Omar El Atmas upset the seedings with a 110-minute five game win over  Tayyab Aslam – coming from two games down –  to complete the decimation of the top seeds in the bottom half of the draw.

The day finished with Pakistan’s Syed Ali Bhokari stopping the Egyptian charge as he beat Youssef Soliman 3-2 in 79 minutes to make it four different nationalities in the semi-finals. 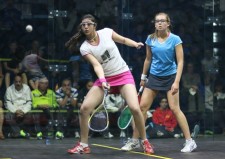 Both top seeds Diego Elias of Peru and Egypt’s Nour-el-Sherbini reached the semi-finals of the World Junior Squash Championships in emphatic style with both glad to get to that stage, but anticipate tougher opposition as the finals approach in Windhoek. The semi-finals are on Thursday, with the finals are to be decided on Friday.

“I am quite happy I made it to the semi-finals of the competition and the fact that I have improved with each game has given me more confidence to face the next opponent,” Sherbini said after her quarter-final victory.

She adds that she will do her best to make it to the final: “The competition normally gets tougher through the rounds, but I’m ready and so far I’m really glad that I have made it thus far.”

Elias showed his supremacy once again when he tactically got around the pace shown by Egypt’s Mohamed El Gawarhy, winning in straight sets 11-6 11-4 11-6.

“I’m happy with my progress so far. I know it’s going to get tougher, but I am in good shape and hope to make it to the final,” said Elias after his victory.

He added that it does not matter who he faces in the semi-finals, but expect strong opposition as the matches are all getting tough.

“There is no player here that can be written-off. The best thing is to be prepared for anything as one never knows how it will turn out in the end. But for now, I will take it one game at a time,” he added.

Meanwhile, Namibia’s Le-Hugo van Rooyen pulled off an impressive win 11-1 11-4 11-4 against Botswana’s Tebogo Thalologo to record his first win in the tournament. He dismissed his opponent in just 14 minutes and joins Gerhardus Lottering who also claimed victory after Ali Algallaf of Egypt who retired when the match stood at 5-11 8-11.

Namibia’s Kyle Christopher, one of the youngest players in the team showed a bit of resistance in the first set, but could not contain Nils Lindgren of Sweden, bowing out 11-7 11-1 11-2.