Peru’s Diego Elias, who today became the new world junior champion, says he is going to celebrate his victory first, while Habiba Mohammed, who clinched the women’s title, is already focusing on her next tournament.

Elias, the top seed from Peru eased to victory against Egypt’s 9/16 seed Omar El Atmas, who had spent more than twice as long on court to reach the final.

“This is a wonderful victory,” said Diego. “It was not as difficult as the semi-final but all I can say now is that I am going to celebrate in style.

“I really understand that he was tired as he had a tough few matches before the final, but I will not say my victory was easy. He fought hard and tried his best, but I kept my composure and just focused on doing the basics right.”

“I was carried through the tournament by my fitness and all thanks to my dad and coach who put me through all the paces”.

A dejected Omar El Atmas admitted that the final was one match too far:.

“I was really tired today. I had a tough few days, but unfortunately it’s the nature of the sport and I tried to hang in there. Diego is a class player and I knew I was going to have a very difficult game. I would like to congratulate him on the win,” he added. 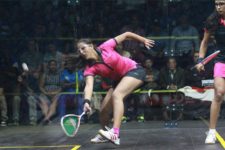 In the women’s final 15-year-old Mohamed produced a second consecutive stunning upset as she came from a game down to beat second seed Nouran Gohar, having beaten the top seed and defending champion Nour El Sherbini in a marathon semi-final.

“You know I celebrated the win over Nour el-Sherbini in the semi-finals, and winning the final is even a greater reward.

“I am thankful for that, but I’m looking forward to the next tournament in Malaysia”. 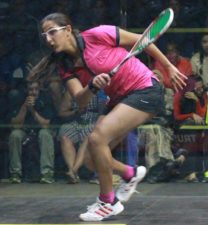 Mohammed has been at the receiving end of a few warnings for time-wasting during her matches, consistently tying-up her shoe laces and cleaning her protective glasses.

“it was part of the game,” she said. “I can’t do anything about that, I had to do that because I was experiencing it. It is not deliberate and its no tactic really.”

While Elias’s win marks a historic first title for Peru and ends a run of eight successive wins by Egyptians, while Mohamed’s victory keeps the title in Egyptian hands for the fourth time in a row and the eighth in the last nine events. 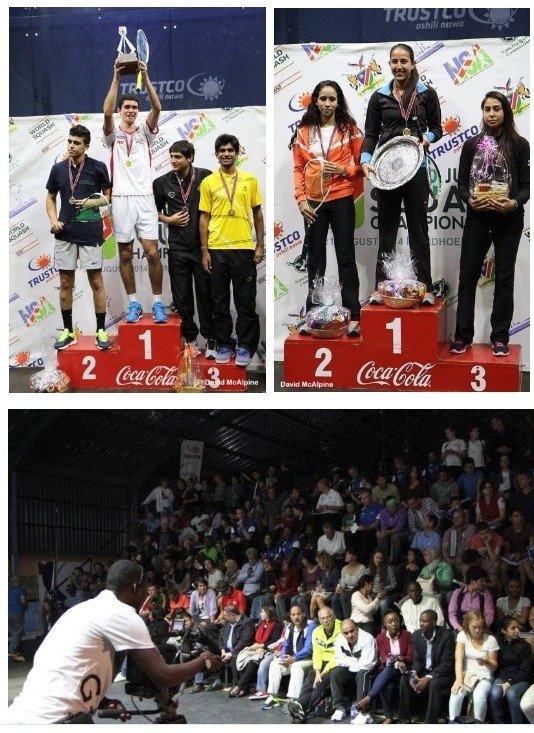 After yesterday’s dramatic semi-finals, two new champions are guaranteed – and at least one of them will be Egyptian.

In the Girls’ final second seed Nouran Gohar is up against 15-year-old Habiba Mohamed, who yesterday ended Nour El Sherbini’s reign in a dramatic match.

Top seed Diego Elias, who has won all five matches in straight games, also meets unexpected opposition as the Peruvian meets Omar El Atmas, who has spent over twice as long on court to reach this stage (330 v 158 minutes) .