Both the Men’s & Women’s World Junior Championships – the sport’s first ever world championships to be held in the southern African country – will take place at the Wanderers Sports Club in the capital Windhoek from 10-15 August, followed by the Men’s World Junior Team Championship from 16-21 August. Centre-stage at the venue will be a Courtwall all-glass showcourt – seen in Namibia for the first time. 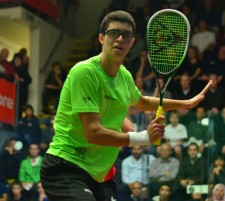 After winning the US, South American and Pan-American Junior squash titles last year, 17-year-old Elias is already enjoying a highly promising run on the PSA World Tour in 2014 – with three final berths and a maiden title already to his credit.

The Lima-based teenager is the event’s top seed and expected to meet defending champion Karim El Hammamy in the men’s final. The 18-year-old from Cairo won the title for the first time last year in Poland – becoming the fifth successive Egyptian champion and maintaining his country’s grip on the trophy since 2004.

Egypt have also held the women’s title for all but one year since 2003. The 2014 favourite is title-holder Nour El Sherbini, the 18-year-old from Alexandria who is bidding for a record fourth title after winning for the first time – aged just 13 – in 2009.

“The staging of these championships for the first time in Namibia is a great follow-on from the recent WSF Ambassador Programme visit to the country in 2012,” said World Squash Federation CEO Andrew Shelley.

“The championships have attracted more than 150 players from 30 nations from all corners of the globe.”