Peruvian Diego Elias and Egyptian Habiba Mohamed will begin their bids to retain their world squash titles when the 2015 World Junior Individual Squash Championships get underway on Sunday in Eindhoven in the Netherlands.

More than 170 teenagers from 34 nations will compete in the World Squash Federation event at the 15-court Squashtime Centre from 26-30 July.

Elias made history a year ago in Namibia when he became Peru’s first world squash champion after breezing through the 2014 World Junior Championship field without dropping game. The 18-year-old from Lima has already made his mark on the PSA World Tour where he has achieved a career-high world No.43 ranking after picking up three titles.

Earlier this month in Toronto, Elias confounded the draw in the Pan American Games squash event by winning the silver medal – becoming the youngest player ever to reach the final. 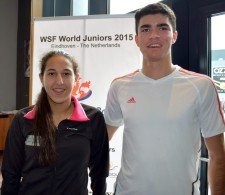 Alexandria-born Mohamed has a formidable world record in her sights as she bids to win the women’s world junior title for the second time – aged just 16!

Already ranked in the world top 20 – and the youngest ever winner of a WSA World Tour title at the age of 14 years and five months – Mohamed could become the first ever four-time winner of the world junior title.

Favourite Mohamed gets her 2015 campaign underway with a second round match against home hope Suzanne Peters.