7th Happiness in a row for Egypt… 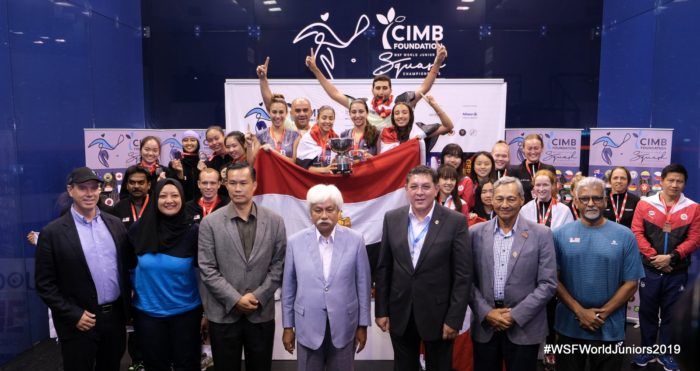 Watch back our recap of all the match's biggest moments 🇪🇬 v 🇲🇾

A little thought for Dr Samiha Aboulmagd, who years ago, told me that the danger for Egypt would come from Malaysia after she went with the Juniors for an event there. “So many talents are coming from there” she told me “they will be very dangerous very soon”.

And she was right. 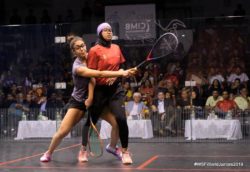 Today, we saw two different style of players I felt. The first one, very street wise, able to  slow down the match when she needs to and having a movement that has been the cause of several complaints from players, but clever not to really prevent access to the ball. Add to that a fantastic attacking game, in particular a boast that is a killer, a return of serve that got her some free points at dangerous times, and taking the backhand volley very early David Palmer’s style. I’m talking of Aifa Azman of course, that could have well been the World Champ runner up or even Champ had not Jana stopped her in the semis, when she had match balls…

The second player, I have nicknamed her “The Sniper”. She is fast, hard to read, moves well, is ruthless – I saw her play against a little Hong Kong girl, no mercy I tell you! – finds a backhand low kill that could be her trademark, and carried by her crowd, her king, and lifted by being the underdog, the Sniper showed her class today. Remember that name, as I feel we’ll hear it a lot in the future IsA, Ainaa Ampandi. 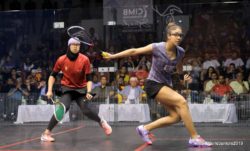 Too much pressure for Hania El Hammamy at the start of the match today I felt. When she tinned a simple shot on the first rally, I remember thinking she could lose that game…  Yes, too many errors from the Gazelle in the first, just nerves really. Down 5/2, 9/3 , and two errors to finish, 11/6 to Aifa in 9m.

But merci Experience. You don’t come and reach WR15 without acquiring some mental strength. Able to make sure she was not impaired by her opponent movement – making the ref well aware of her displeasure – Hania regained control in the second, 7/3 11/6 in 8m….

The 4th is a formality really, the Gazelle in complete control, in 7m, imposing her relaxed and accurate squash for her last junior match, as Hania is 19 on 1st September…

“I never wanted to be the reason why the team loses so I went in there and I wanted to push hard for me teammates,” said Hania.

“Winning the third game was big for me as it certainly gave me a lot more confidence and I’m really pleased to finish my junior career this way.” 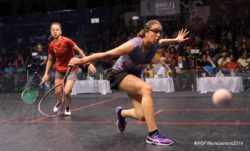 Farida Mohamed, nervous as well in the opener, hitting far too hard for her own good, made a few errors, from a 3/0 lead, only to lose the next 4 points. It will be good experience for the young Egyptian I feel, as she made some “junior errors” which I’m sure she’ll learn from…Point for point for the rest of the game, bit of help from the ref with 2 harsh calls I feel for Egypt, and it’s 11/9 for Farida in 9m.

Second game, again maybe some lack of experience from the Egyptian bless her, as she was in complete control squashwise 6-2. A few fist pumps and hard rallies, and we are back at 7/7. No stopping the Malaysian Sniper, 10/7, 11/8 in 8m…

Talk about no stopping the Malaysia, 4/1 up she was, Farida levelled 4/4 but it’s 7 points on the trot for the Sniper, relaxed, while Farida gets more and more tense. 11/4 in 6m for Malaysia. Needless to say the crowd is carrying their hero, and we think that Jana might have a big mental match on her racquet if Farida doesn’t find her accuracy at the back sooooon.

Well, the fourth shows how much Farida learned in 2 games. She holds her nerves as impotent after taking viagra when it’s, and despite a few random calls from the ref, plus maybe a nice lifeline when the Sniper had to change her racquet at 7/6, time for her to stop, think and regroup, she forces errors from her opponent, to save the 4th and force a decider 11/9 in 10m…

“I looked to my team and coaches and I knew they needed me to win and I badly didn’t want to lose too, since its my first team event,” said a jubilant Farida.

“Even when I was 2-1 down and trailing 8-6 in the fourth, I somehow managed to dig in and I’m happy that Imanaged to come back to win. This win certainly meant a lot to me. It’s really great that I delivered the winning point because if I had lost, it would have meant more pressure for Jana.”

Well done girls. You were hot favourites, and sometimes, it’s not that easy to deliver on the day. You did. Mabrouk. Truly and Utterly.

Share
Previous Team Finals : It’s Seven in a row for Egypt !!!!!!!
Next Ninth Heaven for Egypt after dousing Malaysian Fire