Elias sails through to Round of 16 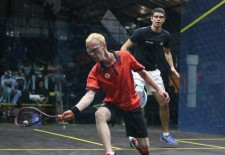 Peruvian sensation Diego Elias sailed through to the Round of 16 after he dismissed his two opponents in his two games on Tuesday with ease, after he got a bye on the opening day of the World Junior Squash Championships in Windhoek, Namibia.

Elias, in both matches was supreme with tricky shots and at times classy to the delight of the spectators who gathered in numbers at the new all-glass court – a first for Namibia.

Egyptian junior women champion, Nour El Sherbini and also a favourite to make it through to the finals, only comes on court for her first match against South Africa’s Kacey-Leigh Dodd [9/16] on Wednesday.

There were mixed results in other matches, with the host country losing all their matches in both the men and women individuals.