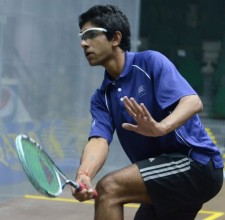 Asian  junior runner up Kush Kumar, an Indian Squash Academy trainee will lead India’s charge in the 2014 WSF World junior squash championship which is to be held in the southern African country of Namibia from August 10 to 21.

Kumar, who was instrumental in helping India gain a bronze (India’s best show till date) in the team event in the previous edition held two years ago in Qatar, has been given  3 / 4 seeding and a first round bye.

Other members of the side are Madhav Dhingra , Vijay Kumar Meena , Velavan Senthilkumar (recent winner of Pioneer Cup U-17 event) and Harshit Kaur Jawanda, (national U-19 girls champion).  Avinash Bhavnani  (coach) and Cyrus Poncha (National coach) are accompanying the team.

The Squash Rackets Federation of India invited two ‘sparring partners’ to Chennai in preparation of the India players participating at the Commonwealth Games and World Junior Championship 2014 from July 7, 2014 for duration of 4 weeks. Ali Anwar Reda (World ranked 48) & Mazen Hesham (World ranked 34) both from Egypt were invited and this proved very beneficial for the players.

Previous Diego set to Dazzle in Namibia World Championships
Next Day ONE: World Juniors kick off in Namibia