It was a moment of potential conflict for Martin Knight.

Born and bred on the Kapiti Coast, north of Wellington, he played squash for New Zealand at three Commonwealth Games, winning a silver medal with Joelle King in Delhi in 2010.

So as he looked out at court two at the Devoy Squash club in Tauranga, he had to fight a small game of mental gymnastics.

Knight, 33, is coaching the Colombia team at the World Junior Squash Championships and one of his players, Martin Rios, was playing New Zealand’s Gabe Yam. There, in front of him, was the black shirt of New Zealand with the silver fern on it he’d worn so proudly himself.

“If you think about it, you worry about it,” Knight admitted later. “For me it has to be player versus player, not country versus country. That’s easier for me.

“I try not to put any thought into the New Zealand part of it. In the moment of the match I just focus on my player.”

Knight’s certainly not the first New Zealander to coach against his country. Rugby’s had a spate of them in recent years with Warren Gatland, Vern Cotter, Joe Schmidt, Robbie Deans and even All Blacks coach Steve Hansen who coached Wales against the All Blacks in 2003.

“It doesn’t change where are from and what your beliefs are,” Knight said of coaching another country, “but I’m there to do a job and my focus has to be on that job.”

It’s a job Knight initially turned down as he wanted to keep playing and have a crack at a fourth Commonwealth Games for New Zealand on the Gold Coast next year.

But a persistent shoulder injury finally forced him to retire and take up coaching full time, joining Colombia six months ago.

He’s enjoying being back in New Zealand and had three players in the top 32 going into the second day of the tournament.

Rios lost to Yam in the 33-64 division but the unseeded Matias Knudsen is doing well with wins against two Pakistan players, one of them the 13th seed, and both beaten by the narrowest of margins – 11-9 in the fifth set. 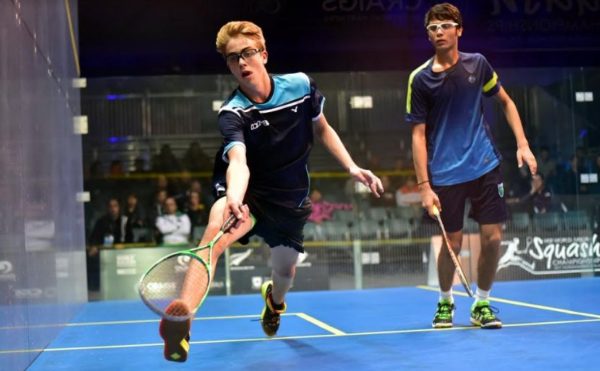 “I was two-nil 10-7 down yesterday, and today I was 10-7 up in the third and it was very hard to finish,” Knudsen said. “I’m so excited to be in the last sixteen – this is my third world juniors, I’m getting further each time and I still have one more to go.”

He plays the second seed, Jordan Mohammad Al Sarraj tomorrow, but for Colombia’s top junior, Ronald Palomino, the tournament’s over after he was beaten in straight sets by top seed Youssef Ibrahim.

Knight says the standard of squash in Colombia’s good and living in Bogota is great, though he chuckles at the standard two questions he is always asked because of the country’s reputation for violence and it’s cocaine trade.

“It’s as safe as any city I’ve lived in,” Knight says, adding that the people are unfailingly friendly and inclusive.

When he’s not watching the Colombians, Knight has kept an eye on New Zealand’s fortunes, which suffered in Tauranga today.