England Squash has announced that England No.1 Laura Massaro will join the coaching team to coach and mentor England’s young guns at the forthcoming WSF World Junior Squash Championships in Chennai, India. 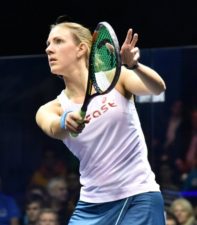 The former World No.1, who has two British Open titles, a World Championships title and 99 England caps to her name said,

“I’m really excited to be heading out to Chennai and hope I can impart some knowledge from a coach’s and player’s point of view.“

Massaro, 34, was part of the team who won the Women’s World Team Juniors in 2001 said and played her final tournament of the season last week in Dubai.

“Having won a World Juniors, I’m really looking forward to trying to help the individuals and prepare the boys for the team event. In the past year, I’ve been working with some of the England Development Programme and England Academy. I’ve got to know the girls in particular, and it would be great to get to know the boys and help them through their matches. I’ve come through some pretty tough matches over my career, and if I can impart any sort of knowledge that would be a bonus.”

“This falls at a really good time from a personal point of view with it being in July and the end of the season, and not eating too much into my summer training.”

National Junior Coach Lee Drew, who will be heading up the England squad said:

“Having a player who has achieved as much in the game as Laura has is a massive opportunity for everyone involved. This is a chance to learn from her knowledge and expertise, and gain an insight into how someone with that kind of expertise operates on a daily basis.

“It’s exciting for the players and for English squash that we are lucky enough to have a player like Laura willing to take time out of a busy schedule to travel and give back to the up and coming juniors.”

The England squad for both the individual and team events will be announced soon.