In what will be one of the southern African country’s first ever stagings of a world championship event, Namibia has won the rights to host the 2014 WSF World Junior Squash Championships.

“We are proud and excited that Namibia has been awarded the rights to host the 2014 edition of the World Junior Squash Championships, in Windhoek,” said Tyc Kakehongo, the Tournament Director for Desert Events Namibia on behalf of the Namibian Squash Association. “This is the first event of this magnitude to be hosted in our country and we look forward to welcoming juniors from all over the world to our beautiful country.

“The main objective for the Namibian Squash Association remains to promote squash as a choice of sport for the general public. By hosting a global show-piece of the sport, we hope this will give a major boost to our vision of mass participation from the full spectrum of our communities and leave behind a legacy that will see many Namibians – especially our youth – take up a fun and exciting sport.”

The championships have Namibian government support: “We are excited to be part of the process to bring such a major international event to Namibia,” said Sivute Katamba, Chief Administrator of the Namibian Sport Commission on behalf of the Ministry of Sport.

WSF President N Ramachandran added: “For our World Junior Championships to be awarded to Namibia next year after Qatar in 2012 and Poland this year illustrates further the breadth of enthusiasm for squash – something of which we are very proud.

“I have no doubt that the championships in Windhoek will be a resounding success.” 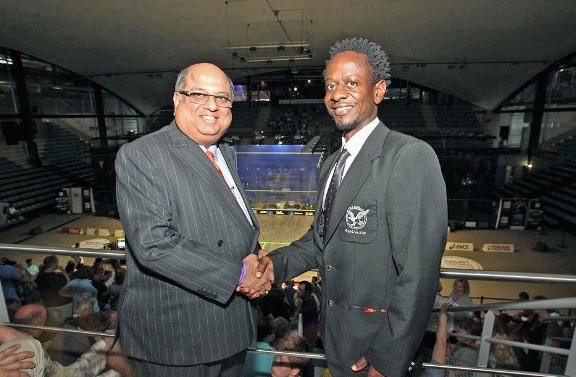 The venues proposed to host the championships are the Wanderers Squash Club – the home of squash in Namibia – and a new multi-sport complex earmarked for completion in the first quarter of 2014.

Namibia becomes only the third African country, after Egypt and South Africa, to host a world squash championship.