A promotional video highlighting next year's WSF World Junior Squash Championships to be held in Tauranga has stirred great interest since its launch in November.

The website (www.wsfworldjuniors2017.com) and promo video were shown at the World Squash AGM a few weeks ago and also at the Squash NZ Hall of Fame prIzegiving.

Tournament marketing and communications manager, Char Niles, says the response has been remarkable.

"We had contact from Team England and the travel agency dealing with them, from some of the Oceania countries and I have had contact with the States. It has been a good response.

"At the Hong Kong AGM we had the CEO of Squash New Zealand attend that and he played the promo video.

"Rather than just promoting squash, because we don't want it to just be a squash tournament, our focus is on the destination.

"They are coming here to play squash but they are also staying here to holiday afterwards so the promo features a whole lot of attractions around New Zealand."

The championships, to be held from July 19-29, will feature to be held in Tauranga, with a portable glass court and live-streaming to be used to showcase the city and wider Bay of Plenty.

Four venues will be used to host the 10-day tournament, with the Devoy Squash & Fitness Centre in Tauranga the main base with Te Puke and Mount Maunganui squash clubs and the Queen Elizabeth Youth Centre all hosting matches.

The tournament has already attracted heavyweight support, with the Government contributing $110,000 through the Major Events Development Fund and Tauranga City Council another $60,000 through its Major Events Fund.

On Friday it was announced Tauranga-based investment advisory firm Craigs Investment Partners have signed on as a major sponsor.

Craigs is the first big local sponsor for the event, which will feature 250 of the best under-19 players from more than 30 countries and will also incorporate the women's world junior team championships.

"One of our key drivers is to be financially secure and getting a significant sponsor on board this early in the piece is a huge boost to the whole organising committee," Werder said.

"It gives us the confidence we'll be able to deliver a tournament of the highest standard to all our international visitors and a worldwide audience and hopefully this will be a catalyst for more businesses to engage with the event.

"We have received positive responses from a number of nations looking to bring their athletes Downunder for the event as well as families and fans wanting to holiday here.

"At the recent World Squash AGM, delegates were impressed with the planning to date and the promotional video highlighting local and national attractions. It has certainly prompted many enquiries from abroad which is fantastic."

"We're passionate about the people in our communities and it means a great deal to us to be involved in an event that will leave a legacy for both the city and the sport." 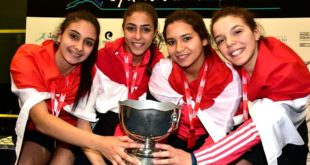 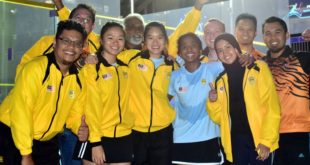 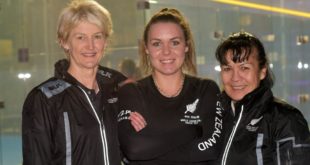