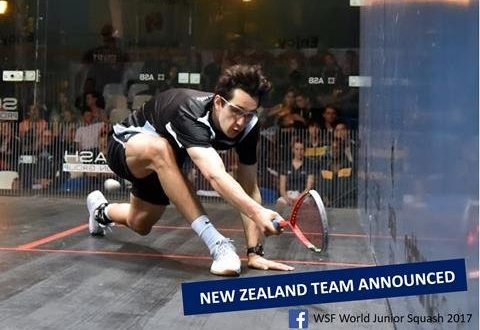 The reserve for the team is Nadia Hubbard, who will also compete in the Individual event, along with Rhiarne Taiapa who is sixth player for the World Junior Women’s Individual event. 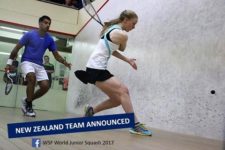 Kaitlyn Watts has claimed numerous titles throughout her squash career and in 2017 she has already claimed the Under 19 Oceania Junior Championships title as well as the Aon New Zealand Junior Open title. Watts competed in the World Junior Championships Individual event in Eindhoven in 2015 where she made her way to the quarter finals of the Special Plate. Watts will look to improve on her performance in 2017.

Anna Hughes has recently moved to Drexel University where she is on a squash scholarship. Hughes has been a representative in Trans-Tasman teams for several years as well as claiming a number of age group titles. Hughes will return during the University break to put in her final preparation leading up to the event.

Anika Jackson is another team member with numerous age group titles to her name. Jackson has strong squash blood with her Aunt Leilani Rorani being well known to many for her squash achievements including Runner Up in the 2000 and 2001 World Open and claiming the 1999 and 2000 British Opens. Jackson will be set to show her strength in the team and the individuals event in Tauranga.

Camden Te Kani-McQueen rounds out the Junior Women’s Team. Te Kani-McQueen, who hails from Rotorua, has previously represented New Zealand and she will be looking to follow in her father’s, Danny McQueen, footsteps.

Rhiarne Taiapa will compete in the World Junior Women’s Individual event and having won the 2017 Under 17 Oceania Junior Championships title, will relish the opportunity of further international experience. Taiapa hailing from the Hawke’s Bay will be looking to take advantage of this event so close to home. 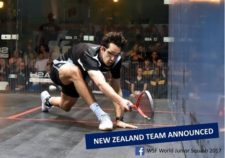 Finn Trimble will compete in the Junior Men’s Individuals event and after having had a strong start to 2017 having won the Under 19 Oceania Junior Championships title and the Aon New Zealand Junior Open title. Trimble was also part of the 2016 World Junior Men’s team where he was knocked out of the Individuals event in Round 3 of the Special Plate. Trimble will look to improve on this result in 2017.

Gabe Yam the recent runner up in the Aon New Zealand Junior Open is another young face looking to gain experience from this event to help gain a place in the 2018 World Junior Team Championships. Yam has also been a previous New Zealand representative in Trans-Tasman Teams events as well as claiming several Age Group Titles.

Lwamba Chileshe has performed well in the 2017 season with some notable performances that have earned him a place in the Individuals event. Chileshe will be making his debut performance on the world stage and representing New Zealand for the first time in this event.

Mitchell Kempton made his debut in a New Zealand team this year competing for the Trans-Tasman Junior Test series team. Kempton has made strong improvements in his match play and will be looking to make a mark on the world stage in Tauranga.

Quinn Udy is the final New Zealand Junior Men’s representative. He was runner up in the 2017 Oceania Junior Championships Under 19 event and then 4th in the Aon New Zealand Junior Open and will be making every effort to step up to this international level of competition.