Jamie Oakley is about to begin an unforgettable sporting odyssey.

He will lead the New Zealand charge at the 2016 Men's World Junior Individual and Teams Championship in Poland from August 6-17 before beginning a four-year squash scholarship to George Washington University in Washington, DC.

The 18-year-old from the Devoy Squash and Fitness Centre in Tauranga, and youngest son of former world champion Dame Susan Devoy, has enjoyed the best 12 months of his career.

Up against professional touring squash players he made the main draw of the Waikato PSA and then in Tauranga he made the quarter-finals of the Tauranga PSA defeating Kashif Shuja with a world ranking of 155.

Oakley says Poland will be a huge challenge for the New Zealand players individually and in the team's event. 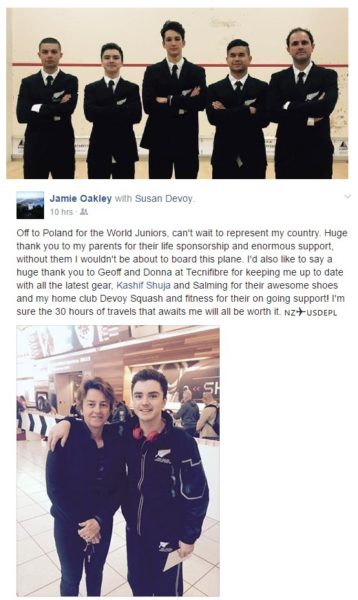 "The draw recently came out and I have played a couple of them before. I played the US Juniors for the last three years which a lot of the good kids play in and some of them are just crazy how good they are.

"I would like to make the third round but there are 128 people in the draw so to make the top 32 would be good and anything above that would be a bonus I guess.

"It will be a great experience for everyone going from New Zealand. Hopefully we can do the country proud and hopefully I can do the club proud as well."