It’s all over now, but how did they think the World Juniors went ? 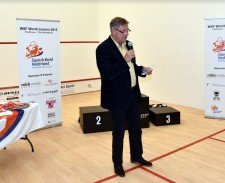 It started more than a year ago when there was no bid at all for this year’s event, we had the idea of combining the World Juniors with the Dutch Junior Open. We discussed it with a few people including Thomas Troedsson and Hugo Hannes but they weren’t keen on the idea, but we still did a lot of preparation work.

Then Egypt got it, but when that was withdrawn it seemed that the bid could be back on again. We got back in touch with Thomas and Hugo again, but it looked as though if we held it in Amsterdam it would have been more expensive than the budget we’d inherit from the Egyptian event, and they still didn’t like the idea of having two events next to each other. 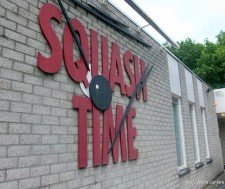 That was when Sjef van der Heijden (former Dutch National Coach and owner of Squash Time) called and said “I’d like to have it in Eindhoven, can I help?”.

Sjef had arranged good deals for transport, hotel, venue, which allowed us to keep the same dates and the same costs. It took two or three days to put that together, and the bid was accepted within another two to three days, it was that quick!

And then the work started … 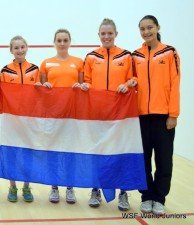 How was it for your home players ?

Having an event like this at home is a once in a lifetime experience – our group of juniors aren’t strong enough at the moment, we probably wouldn’t have sent them abroad to compete but having the event here meant that we were able to give them the great experience of competing in a world championship.

It will have done them all good, playing against other countries and getting exposure at International level.

How do you think it’s gone ?

Given the short preparation I’m satisfied. Some things could have been better, but it’s all about that it should take place and that we have new World Champions, that’s the most important thing. 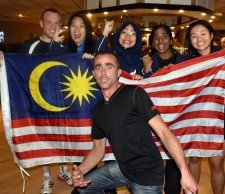 We underestimated the transport that we’d need in the early days, it’s a big centre with a lot of courts and everyone wanted to be there for training, all the courts were fully booked in the three days before the event. We reacted quickly though, and Mikael handled it well, like he did the transport throughout the event. 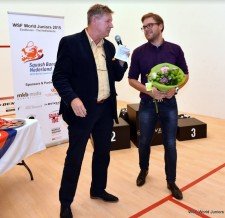 As a squash addict, the boys’ final was fantastic. I love the way Diego plays, he’s a very good sport, always plays on, very nice to watch and is a worthy champion.

In the girls the team spirit for all the countries was great to see, and they all seemed to enjoy being part of a team.

We’re very happy with the streaming, Sjef and his whole family were great throughout, and the co-operation we had with him and with the Hotel worked very well. 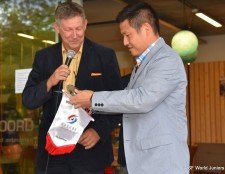 The tournament team was wonderful. One of our worries was getting enough people to help, but it worked out great.

It was great to have SquashSite here too, getting the news out fast, some lovely coverage and showing the world what a lovely sport we have.

Would you do it all again ?

YES! Next year in Rotterdam, with any luck !!!

From all accounts the WSF-World junior squash championship held in Eindhoven in Netherlands provided for some rich competitive experience for the Indians. “International exposure” was a key objective when India decided to field a maximum of 11 players, including six girls, for the championship which this year witnessed individual competitions for boys and girls and team event for girls.

In the Individual event Harshit Jawanda and Velavan Senthilkumar progressed to the third round in their respective categories. The team competition came as the second phase of the championship and the focus was totally on the girls here. Placed seventh on the last occasion in Poland two years ago, there was an inner desire in the Indian contingent to try and improve on that.

Seeded seventh and placed next to USA in the pool which also had Finland and Australia, India’s immediate task was to cross the pool-stage and come into the top eight. This was achieved with a measure of confidence. Mention has to be made of Harshit and Akanksha Salunkhe here for the way they shaped for the big moments.

With eventual winner Egypt as its opponent in the top-eight draw, India knew defeat was staring at us. The look out then was for improving the placings. It was here that the biggest drama for India in this championship unfolded.

India was pitted against New Zealand, a team which it had beaten in Poland last to finish seventh. And it could have repeated it again. The tie score was 1-1 after Harshit had undone the damage of Adya Advani’s loss. The fate then hinged on the 16-year old Akanksha and this gritty girl played her heart out against Juee Bhide to take the score to a point away from victory not only to herself but to the India. 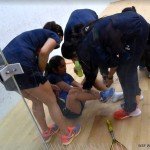 The contest turned on the head there. Leading 11-8, 11-8, 10-7 disaster struck Akanksha. The girl developed cramps in her leg, was in severe pain and her mobility was down to virtually nil. The New Zealand opponent seized the moment and saved three match points to grab that game and eventually the match. 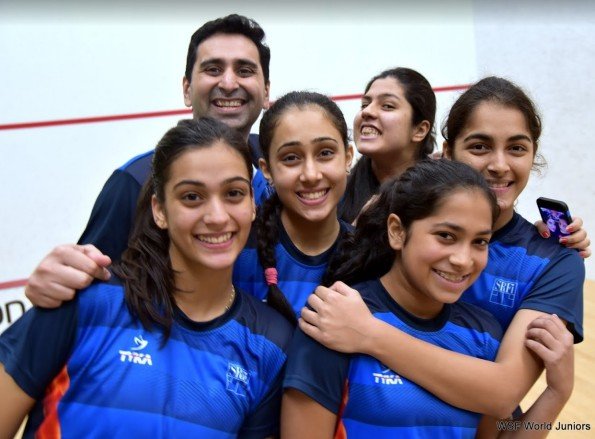 Against Hong Kong next for the 7-8 placings, Akanksha sat out and her replacement Nikita Joshi put up an inspired show, won her match but Adya and Harshit could not, leaving India to settle for the eighth place.

India went down fighting and what was inspiring was that we have now two players Nikita and Akanksha who will be there for the next edition and surely a better result can be expected.

There are players coming up and competitions should make India stronger in the years to come. 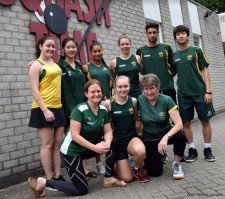 Didn’t they do well !The facilities, the club, the courts, the hotel, the transport, it was brilliant, and the volunteers were incredibly friendly and helpful.

With Keesha getting ill towards the end of the individuals we went into the teams with a weakened number one which didn’t help. Three five-setter in two days took its toll but she was a trooper, our little Digger, she stuck in and finished the tournament on a high. 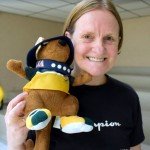 It’s been a lesson for them all, we played to our seeding but we were aiming for top ten and we’d like to be moving up, getting back into that top eight, then the top four.

It’s also been a pleasure to be with them, their behaviour and team spirit has been exemplary. We need to step up and expose our teams to this level of squash on a more regular basis.

Overall it’s been a very positive experience for the girls. The results have been great and testament to the work that’s been put in beforehand.

It’s disappointing to get to the final and to lose again, but we made it very competitive and they’ve proven that they belong on this stage.

The Egyptians are competitors for sure, they know what to do when it gets tough, so congratulations to them.

We’re closing the gap and hopefully it won’t be too long before we’re stepping up onto that top step. 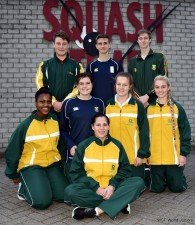 We had zero expectations, but we’ve definitely exceeded those!

The event was very well organised, especially considering they had so little time to prepare – everything was professionally done, it all ran smoothly, all credit to them.

None of our team had played in a team competition before, but they all adapted to it very well and to see how the team dynamic grew was great. Two out of the four will still be available next year, and now that we know what it’s like, so watch out ! 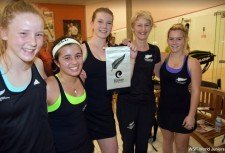 We’re absolutely thrilled with where we’ve ended up – we came here not knowing where we’d fit but after some good performances in the individuals we were delighted with our team seeding, and we were only two points away from reaching the semis!

It’s good for our girls to get so many competitive matches, we’re geographically disadvantaged so events like this are crucial for us. All of out top three played at least one match well above any level they’ve played before, they all showed such heart and they did us proud. 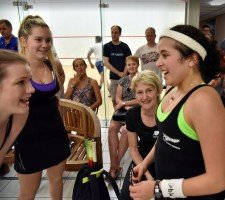 Ellie played brilliantly in the individuals, and Abbie played at least once every day and reached the special plate final. We usually only bring four, but this time we brought a couple of younger players to get a grounding ready for next time when we should have a good, developing team.

This group is a real team, and that makes it happen – it’s incredible how supportive and considerate of each other they’ve been. 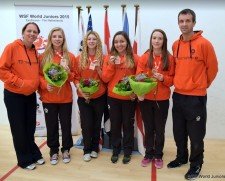 Eindhoven and the Dutch Federation have done really really well to put the event on at such short notice, they’ve done a fabulous job …

It’s a pity there wasn’t a 3rd/4th match to give them another competitive match under tournament conditions, this is the perfect environment to get the experience thy’re going to need in their later careers.

The team reached its seeded position, a top four finish what what was expected, we hoped for more the the US were very strong on the day and they played really well. We’ve got a good competive younger group at home so we should be competitive again in two years’ time.

If someone had said that we’d be going home with two bronze medals, one in the Boys’ individual and in the Girls’ teams, I would have taken that.

The girls are an improving team, the top two will still be available in two years’ time when we should be there or thereabouts again.

We’ve had a good two weeks, exceeded expectations in both events, so it has to go down as a successful event for us. 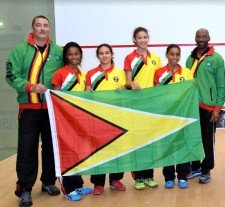 It’s been good to see the girls improve as the tournament progressed, they were very nervous at the start but grew in confidence match by match. They played well against some strong teams like Germany and South Africa and could have won some of those games.

It shows all the young players in Guyana and the Caribbean that the opportunity is there to play the best in the world, and to enjoy it. 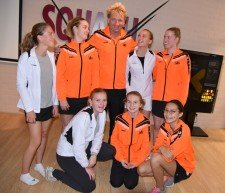 It was tricky this week, all the pool and all the playoff matches for both teams were at the same time, so I had to concentrate on one, except for this last one where they were playing each other!

I’m here primarily for the Netherlands this week, the girls all understand that and they get along together very well so it wasn’t a problem, although coaching one player against one of your own players isn’t easy.

There’s still a long way to go, but Netherlands were fielding a very young team, one at 13 and one at 14, but they know how far they have to go to catch up to the other teams which is a big positive to come out of this tournament for us. 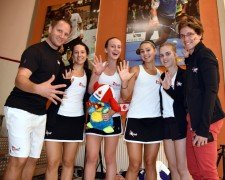 The girls played their best matches in the last two ties, especially Chloe and Maddy. What’s great is that you get to see them improving over the week and learning how to play international quality squash.

We’ve had some tough matches, the group between four and nine is very competitive, so we’re delighted to improve our seeding to make fifth.

I would say we’re doing OK, with room for improvement!

We have a young team with three of them playing for the first time and two of them only 15. Choi Eun Shan made the top eight in the individuals which was a good performance, especially with so many Egyptians there.

It’s pleasing that we stay in the top eight, the experience here should do us good next time when we look forward to doing better.

Previous World Juniors support War Child
Next Nouran Gohar: I finally made it !