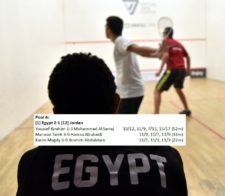 There were 13 matches on Friday, the first of two days of Pool matches leading to four last 16 matches on Sunday and quarter-finals on Monday.

All the seeded teams won comfortably on Day One, with Pakistan and France winning both their matches to finish top of Pools B and C, qualifying for the quarter-finals and earning themselved two days off! 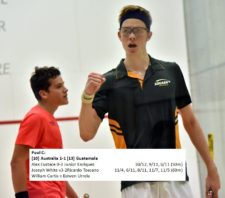 That left this morning's Hong Kong v Germany and Australia v Guatemala matches to decide second spots in those groups, with Hong Kong winning 3-0 and Australia just about surviving 2-1.

In Pool D India, having beaten their two closest rivals,finished off with a 3-0 win over hosts Poland to clinch their palce in the quarter-finals, while New Zealand beat Argentina 3-0 to take second place.

England, Canada and USA all came through those tests safely, but Malaysia – resting individual champion Eain Yow Ng –  came unstuck against South Africa, who took the first two matches to create the only upset of the day, moving into the playoffs for 1st to 12th place at Malaysia's expense.

The final match of the day, played out on the Glass Court in the City Centre, saw Jordan claim the last place in the top twelve with a 3-0 win over Switzerland.

The playoffs begin on Sunday . Full results and drawsx on the Team Draws page.

Loads of photos in the Gallery

Previous 2016 Finals : Two for Gohar, Ng for One
Next Teams Day Three