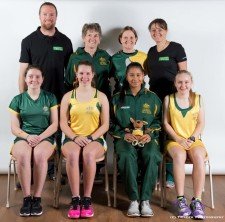 Australia has announced its team to compete in this year’s World Women’s Junior Squash Championships in the Netherlands, headed by outstanding teenage prospect, Lakeesha Rarere.

Rarere is the form junior in Australian squash, recently crowned Oceania and Trans Tasman U19 champion, and a runner up in this year’s Australia Day Classic in Ipswich. The Queensland 17-year-old is currently ranked 82nd in the world.

18-year-old Victoria Leow made the semi-finals of the Oceania Junior Championships last month and will be a strong member of the Australian team. The Victorian is ranked 171st in the world.

Queenslander Samantha Calvert has made a strong start to 2015 already, the 18-year-old having made the quarter finals of the Oceania Junior Championships and the Australia Day Challenge.

The fourth member of the team, and the youngest, is 17-year-old Rachael Gibson, from NSW.

South Australia’s Lauren Aspinall will travel with the team and compete with the other four in the individual championships, but will not stay on for the  Team event.

The team will be coached by Australian squash legend and former world number one, Vicki Cardwell,with Robyn Prentice as her assistant.