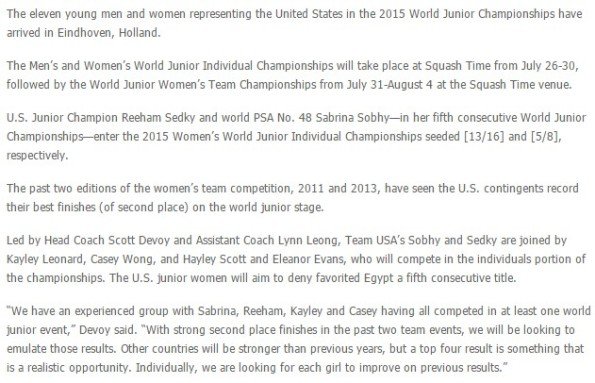 Full story on US Squash

The eleven young men and women representing the United States in the 2015 World Junior Championships in Eindhoven, Holland, have been announced.

The past two editions of the women’s World Junior Team Championships in 2011 and 2013 saw the U.S. contingents record their best finishes on the world junior stage—second place.

“We have an experienced group with Sabrina, Reeham, Kayley and Casey having all competed in at least one world junior event,” Devoy said.

“With strong second place finishes in the past two team events, we will be looking to emulate those results. Other countries will be stronger than previous years, but a top four result is something that is a realistic opportunity. Individually, we are looking for each girl to improve on previous results.”