There was no play today, but it was the Opening Ceremony tonight, and the tournament has been officially opened …

During the day there were Tournament, Managers and Referees meetings, a BBQ before the opening ceremony which started at 19.00, more training for the teams already here, and the arrival of the last players and teams.

The Opening Ceremony divided up nicely into sections – a representative from each country brought on their National Flag, followed by welcome remarks by Marc Veldkamp on behalf of Squash Bond Nederland who stepped in at short notice to run the event, and from the WSF’s Hugo Hannes.

Quick presentations of the Referee and the Volunteer teams was followed by an energetic dance display, and the tournament was officially declared open .

Play starts at 10am on Sunday, with matches on six courts throughout the day until around 9pm. 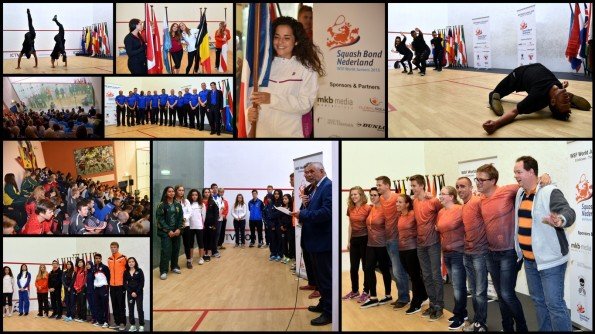 All the Photos from the day in the Gallery