Report from US Squash

The U.S. reached the quarterfinals following a 2-1 victory over Jordan Sunday, while France enjoyed a rest day Sunday as the three seeds.

“Our match against Jordan last night was a tough one and we finished quite late,” said head coach Adam Hamill. “We did a lot of recovery and came into the quarterfinals believing we had a real chance.”

With the order of play set as 2-1-3, Team USA’s Spencer Lovejoy led off against France’s Victor Crouin, who is ranked world No. 199 on the PSA tour.

After three long games, Crouin was on the verge of closing out the match in the fourth game with four game balls at 10-6. But Lovejoy dug deep to fight off four match balls and force a fifth game 15-13. The marathon fourth game took its toll on Lovejoy in the fifth game as Crouin controlled the fifth 11-3 to hand France a 1-0 lead.

“Spencer played outstanding squash against a very strong Victor Crouin, pushing hard to get the fourth,” Hamill said. “Crouin showed his experience in the fifth and played attacking squash to give France the first tie.”

The No. 1’s followed on court next with U.S. junior champion Douglas pitted against Benjamin Aubert, who is ranked world No. 166 on the PSA tour. France were one game from reaching the semifinals after Abubert took the first two games 11-3, 11-8.

The Frenchman led the third 3-0, but Douglas came back to take the third 11-9. Down 3-0 early in the fourth, Douglas staged another come back to force a fifth game 11-8. The American stormed to victory winning the fifth 11-3 to level the score at 1-1.

“Andrew has had an unbelievable week, first taking Eain Yow world junior champion to five games then another five games against the Jordan No. 1.” Hamill said.

“Andrew had a slow start Physically against the French No. 1, however as the match progressed Andrew found more accuracy to slowly breakdown the Frenchman winning in five and keeping Team USA in the match.”

The decisive match came down to the No. 3’s, Team USA’s Scherl against France’s Sebastien Bonmalais. Scherl continued the U.S. momentum by winning the opening two games 11-5, 11-6.

A closer third game saw Scherl poised to seal the match with with match ball at 10-9, but Bonmalais fought back to force overtime. Scherl squandered two more match balls, and Bonmalais capitalized on his third game ball to send the match to a fourth game 15-13. A determined Scherl pulled away from 5-5 to clinch the historic victory for Team USA 11-6 in seventy minutes. 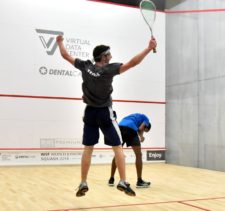 “Sam took the court with the match all tied, handling the pressure like a pro and playing solid and varied squash,” Hamill said. “The French No. 3 moved like a dream and was seemingly impossible to put away. Scherl, however found a way after almost seventy minutes to secure victory for the U.S.”

The result guarantees that the U.S. will top its previous best junior men’s team finish of seventh place set in 2002. 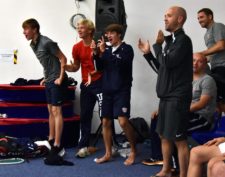 “As coach I am truly overwhelmed at the team’s performance,” Hamill said. “This is a deserved win, which they have all worked extremely hard for over months and years.

"Having Alex Stait and physiologist Jeremy Mayer to keep the players moving makes all the difference. This is a historic moment for the US Junior Men’s team, with a guaranteed highest finish. We’re incredibly grateful for the support we have received from US Squash to make this event possible for us all.” 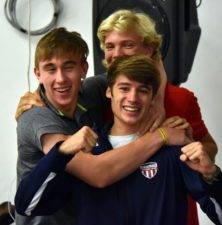 “We were in tears of joy after the victory against France,” said team member Gabriel Morgan.

“After playing junior squash for ten plus years, never have we felt so much pride and exhilaration as we have representing our country on the international stage. The team has worked so hard for this and we all feel that it’s finally paid off. Can’t wait for the semis.”

Original report from US Squash