The twelve young men and women representing Team USA at the 2017 World Junior Championships in New Zealand, July 19-29, have been announced.

The U.S. Junior Women’s Team will be led by fourteen-year-old, two-time U.S. junior champion Marina Stefanoni, who made her world juniors debut in the 2016 individual competition by reaching the round of sixteen. 2017 U.S. junior finalist Grace Doyle, at eighteen years old, returns for her second world juniors as the eldest member of a youthful squad. 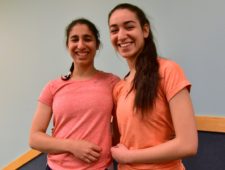 In the individual competition, seventeen-year-old Emme Leonard makes her world juniors debut, as does U17 national champion and sixteen-year-old Elisabeth Ross, who occupies the developmental spot in the squad.

Harrison Gill returns for his second world juniors individual competition after reaching the second round of the main draw in 2016.

The junior men will have two west coast representatives in the form of San Mateo, California’s Cole Becker and Seattle’s Salim Khan, who both make their first world juniors appearance.

Becker, seventeen years old, pushed Douglas to five games in the junior nationals semifinals, and defeated Khan in the quarterfinals. Khan was the male recipient of the prestigious DeRoy Sportsmanship Award.